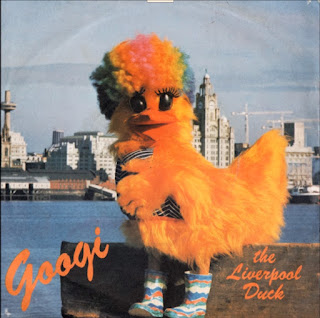 A recent discovery for me, but apparently somewhat well-known in the North of England at the end of the 70s and into the early 80s is comedy ventriloquist Penny Page and her little multicoloured friend, Googi the Liverpool duck.

The first anyone outside of Liverpool would have heard of Penny and Googi would have been when they were selected to appear on the first show of a new BBC-TV talent series, Rising Stars… only then they were known as Pepe and Poppets. It was only in September 1979, just as recording was about to begin, that the duo changed their name. the ‘clever and funny’ act (according to The Stage) did well on the show, their reception no doubt aided by the fact that it was filmed in Blackpool, virtually their own back yard.

The pair made it through to the finals of the show, presented by the terminally unfunny Lennie Bennet, and issued their first single, Googi the Liverpool Duck the day before the final was due to air. Young Penny was hoping for great things, and convinced that their big television break could boost their earnings form around £150 a week to over £1,000, when a blackout by BBC technicians meant that the show did not make it to the screen.

Wallasey-born Penny (real name Joan Critchley) had been in the business since 1974, winning a Sunday People sponsored talent show, although she had her first break at the age of 12, winning first prize for her vent act at Butlin’s. Her TV exposure brought offers of work flooding in, and that Christmas penny and the Wacker Quacker appeared in panto with comedian Tom O’Connor at the Liverpool Empire and, apparently, stole the show. Soon Liverpool’s Lewis’s department store was selling Googie hand puppets, but when the final of Rising Stars finally aired (more than three weeks after it was originally scheduled) they lost out to 16-year-old singer Jacqui Scott.

Still, they soon landed a summer season at Pontin’s holiday camp, and similar bookings would follow, including a residency over Easter 1981 at the Floral Pavilion, New Brighton, where she had first appeared as a teenage ‘lido lovely’ in a local revue. It seems that another well-known Scouse singer, Cilla Black, was even asked to perform Googi the Liverpool Duck by an audience member when she performed in Australia. 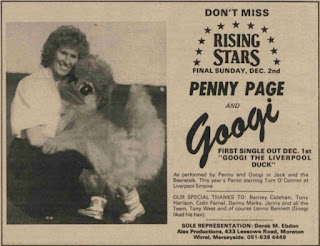 Penny married Welsh-born singer David Alexander, who also recorded for Ace Recordings. She adapted her show, with Googie getting into trouble for using colourful language (to go with her colourful hair and wellies), but by 1986 Penny was tiring of the local scene and the expectation that her act would become more blue, deciding instead to concentrate on entertaining children. She introduced a new puppet to her act, Skittles the dog, but before long was back playing to adult audience with Googie accused (by The Stage) of possessing ‘the foulest of foul mouths’. The pair appeared on Guys and Dolls an international talent show which aired on BSB’s Galaxy channel (no, nor me…) in late 1990, and continued to perform locally, usually on a bill with David Alexander, until 1995 when, sadly, David passed away. It appears that penny put Googi back in her box for good at that point, but she continues to promote David’s work, repackaging his many albums and making them available for his fans.

Anyway, here are a couple of tracks from Penny and Googi: the a-side of their first 45, Googi the Liverpool Duck and their 1981 release That Bird Song.

Email ThisBlogThis!Share to TwitterShare to FacebookShare to Pinterest
Labels: Googi the Liverpool Duck, Penny Page and Googi, That Bird Song