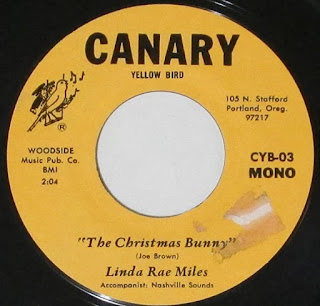 UPDATED 16 APRIL 2020; MY THANKS TO DOREE MILES FOR HER KINDNESS

Happy Easter my friends! Something a little peculiar today, but something that seems perfectly suited to these peculiarly topsy-turvy times we’re living through currently… a Christmas record about the Easter bunny, from Californian country-western label Canary.

Canary was one of two labels set up by songwriter Earl Miles around 1966. First came Canary – named apparently after the birds that Earl kept ('Growing up we did own two yellow canaries: "Pretty Bird" and "Old Ugly",' Doree Miles tells me) – and then the mostly spoken-word offshoot Yellow Bird. The company held a registered office in Redwood City, California but recorded the majority of their material in Nashville (at the Monument Studios) because, as Earl explained, ‘Our artists are all local people, but we want the authentic Nashville country flavor’. After splitting their time between Nashville and Redwood City, at some point in the early 1970s they moved to Portland. It was then that Earl decided to amalgamate, and the company’s sole label became Canary Yellow Bird.

What sets Miles apart from most song-poem/vanity projects is that, initially at least, Miles had some money behind him and was able to employ some decent talent. Kentucky-born but San Francisco-based park ranger and part-time singer Durward Erwin recorded several sides and an album, Mod and Country, for Canary, and some of those tracks were picked up by the Irish company Emerald (distributed by Decca in the UK) for release here in dear old Blighty, and short-lived Philips imprint Nashville for release in Britain and in Germany. Erwin/Miles sides were even issued in New Zealand. 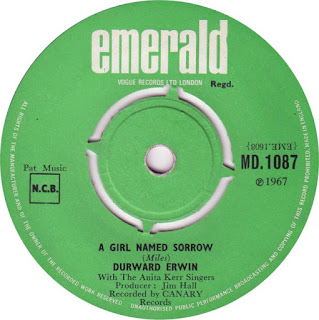 Sadly, despite some success for Miles via Erwin, including the almost-charting single A Girl Named Sorrow, Canary failed to take flight. Mod and Country (issued in 1967) and its related 45s would be about as close as he would come to success.

According to Erwin’s own website, he wrote and paid for the songs on Mod and Country to be recorded, but that is not the case. Of the 12 songs on the album eight are credited to Earl Miles, three to Grace Tindall and one to Gertrude Faith. 'My father wrote most of the songs on the Mod and Country album,' Doree confirms. 'His name is on the original copyright which my sister and I own. I was there as my father wrote many of his songs. He would play his Martin guitar as he created the words and music. I also have the original handwritten scores when he wrote the songs as well as the copyrights. To my knowledge, the songs were not written by Durward. Durward just sang the songs.' At first, I thought that Erwin and Miles could have been one and the same person, but apparently not, although according to later Billboard reports it does seem that Erwin was a shareholder in the business.

By 1969 money must have been running out, and instead of using talent like Erwin, he was relying on family members to record for him. Linda Rae Miles  issued several sides for Canary Yellow Bird; further releases featured the ‘steel guitar artistry’ (that’s how it appears on the label) of one Smiley Miles, who also acted at Linda Rae’s personal manager. 'Justice (Jud) Miles, nicknamed Smiley, was my father's older brother,' Doree tells me. 'My sister and I referred to him as Uncle Jud. Norm may have been his formal name or middle name [For a while Norm Miles was the third partner in the business, along with Earl and Durward]. Jud was Linda's manager and at some point, they married.' 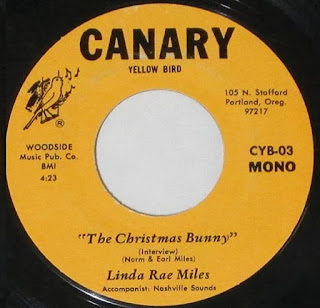 That same year Earl coughed up the moolah to record a cable TV pilot, Canary Ranch, featuring Erwin, Bobby Wyld, Smiley and Linda Rae singing and playing some of his songs. 'As far as I know, there were other investors in the project too,' says Doree. Canary continued for a few years, but with no hits coming Earl decided to diversify, setting up a country records distribution company and artists booking agency from his office in California in 1971. In 1973 Canary relocated to Portland, Oregon. That same year Linda Rae released what appears to have been the last 45 issued by the company, The Christmas Bunny backed with The Christmas Bunny (Interview), promoting the release by performing in the Palo Alto branch of Macy’s department store.

Earl Miles passed away in 1998, leaving his daughters, Doree and Darla, both of whom appear on The Christmas Bunny (Interview), to look after his legacy.

Here are both sides of the fabulous Christmas Bunny 45. Enjoy!