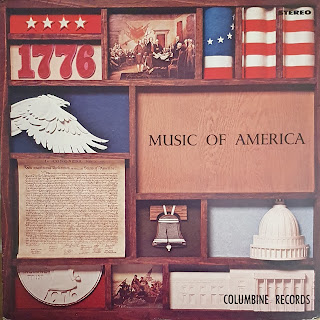 If you were listening to the World’s Worst Records Radio Show this week, (and if you haven’t, you can do so now by clicking HERE) you would have heard me play a couple of tracks from one of my latest acquisitions, a Columbine Records song-poem compilation that was issued, it’s fairly safe to assume, in 1981.

It’s another one of the endless stream of the company’s catch-all Music of America series. There are well over 100 in all; no one has yet been able to fully catalogue them, although Phil Milstein’s long-dormant American Song-Poem Music Archives made a valiant effort some years ago: http://www.songpoemmusic.com/labels/columbin.htm

The cover – and I have several featuring an identical front sleeve – would lead you to believe that this dis was issued around 1976, in time to mark America’s bicentennial. In fact one of the songs on the album, U.S.A. (Garden of Roses) is bicentennial-themed, so how can I be so sure that the album was issued in 1981 when I’ve already admitted that no reliable catalogue exists? For the simple reason that one of the songs, To Yoko, was written about the assassination of John Lennon, which took place on 8 December 1980.

For sure, it could have come out in 1982 or 83, but there is no way that this album could possibly predate 1981. Unless the lyric for To Yoko had been composed by Criswell, that is. As a Beatle, Yoko and song-poem fan, finding and purchasing this album was essential. And it did not disappoint… as you are about to discover. 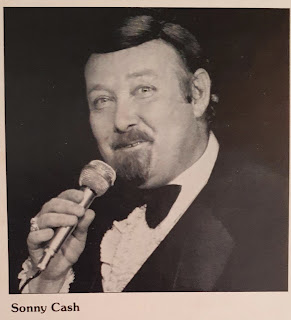 The tracks below feature Columbine regular Sonny Cash, who also appeared on the label as Ralph Lowe, as well as recording for MSR under the names of Dick Castle and Dick Kent. The singer’s real name was Elmer Plinger: no wonder he used a pseudonym. Plinger had been recording since at least 1940: in February of that year, as vocalist of the Modern Mountaineers, he recorded a couple of sides for RCA’s Bluebird imprint, which were also available via mail order retail pioneer Montgomery Ward. As Buddy Ray, he recorded a couple of vocals for the magnificently odd "Night-Club Music" Las Vegas & Country Western, by Ken ‘Nevada’ Maines, in the early 70s, and by the time these cuts were laid down in the studio he had been working as a professional vocalist for over 40 years.

Here’s Sonny/Elmer/Buddy/Dick with To Yoko and the rather wonderful Psychic Cigarette.