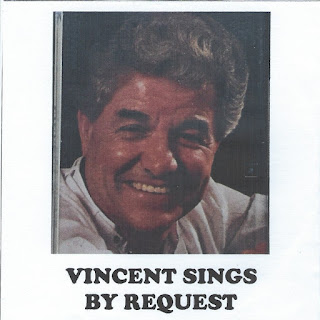 This fabulous little find comes courtesy of regular blog (and radio show) follower/contributor Stephen ‘Beany’ Green, who discovered this, on cassette, on one of his regular charity shop forays and was kind enough to send me a copy.

I can’t tell you much about Vincent Sings By Request, as I’m told that no information about Vince or his fellow musicians accompanied the tape. I’m on the fence as to whether Vince has employed a local pub band or he’s singing to backing tracks, but maybe it’s a mixture of both. The band seems pretty accomplished, although most of the material is of karaoke quality, complete with obligatory washy synths. Some of the arrangements, although simple, are markedly different to those you would hear on a karaoke CD, although the horn section employed on a couple of the cuts sound like they have come straight off an ‘instrumental hits’ collection. If cornered, I would guess that most of the album was recorded in a single session with a keyboard and drum duo, with at least two of the tracks, You Don’t Have to Say You Love Me and Too Young using pre-recorded backing tracks or sampled brass.

I would also assume, from the choice of tracks, that there is a Blackpool or Bolton connection: one of the songs, The Blackpool Belle, was composed in 1975 by Bolton songwriters Howard Broadbent and Jimmy Smith and recorded shortly after by local folk group the Houghton Weavers. Howard Broadbent recorded his own version of the song in 1986, issuing it as a single backed with another of his compositions, The Tram. Both songs appear on Vincent’s cassette, which to me suggests that our Vince recorded his magnum opus sometime after.

I have nothing else: I’ve spent literally minutes scouring local online newspaper archives but cannot find a single mention of Vincent or his album. Can anyone out there help?

Here are a couple of tracks to whet your whistle while we wait for more information: I Just Called to Say I Love You and You Don’t Have to Say You Love Me

Once again, thanks Beany! I love it!

Email ThisBlogThis!Share to TwitterShare to FacebookShare to Pinterest
Labels: The Blackpool Belle, Vincent Sings By Request