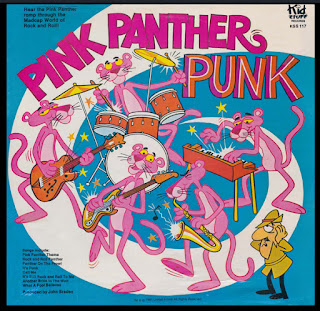 I am, once again, indebted to my good friend The Squire, for notifying me of this particular horror.

Issued in 1981 by children’s educational recording specialist the Kid’s Stuff Company, Pink Panther Punk was an attempt to introduce the kids to pop music via their favourite Saturday morning cartoon show (or Saturday afternoon, immediately after Grandstand, if you lived in the UK).

One has to assume that the average American child was not that discerning, for Pink Panther Punk contains absolutely no trace of anything remotely connected with punk rock: no Sex Pistols or Ramones covers, and no baggie of gob and zero safety pins were included in the package. In fact, what you get over the course of this ridiculously short album – just 25 minutes long – are four pop covers, including is a Billy Joel song, a Doobie Brothers song, and recent hits from Blondie and Pink Floyd, with an equal number of Panther-themed nonsense from composer John Braden.

Braden, who started out as a solo folk singer in the late sixties, found his niche with Kid’s Stuff: his 1969 debut, a weird hybrid of Tiny Tim vocals and pop/country arrangements, met with about as much interest as his Tom sawyer-themed musical, Downriver, but by the dawn of the 80s he was churning out album after album for Kid’s Stuff, including two Panther-themed LPs in 1981 alone. His sole A&M album would later accrue some interest among collectors for featuring an incredible line-up of session musicians, including Sneaky Pete and Ry Cooder. Braden was also a member of Manhattan’s La Mama experimental theatre, writing or co-writing musicals including Silver Queen Saloon and Sixty Minute Queer Show.

The Kid’s Stuff label was founded in 1975 by children’s entertainer and TV personality Bob McAllister, the host of Wonderama and Kids Are People Too. Initially specialising in educational and read-along recordings, over the years the company developed partnerships a number of toy and cartoon franchises, and by the time Braden came on the scene they were pumping out albums to accompany the latest cartoon starring Strawberry Shortcake, Pac Man, Raggedy Ann and Andy, or Barbie vehicle. Soon Masters of the Universe, Transformers and giant cartoon Great Dane Marmaduke would join the catalogue, and Kid’s Stuff would enjoy a tremendously successful decade.

Sadly John Stuart Braden Jr., would not accompany them on that ride: the talented singer, composer and actor died in 1987, aged just 41, of pneumococcal meningitis.

Here are both sides of the fun Pink Panther Punk album. Enjoy!