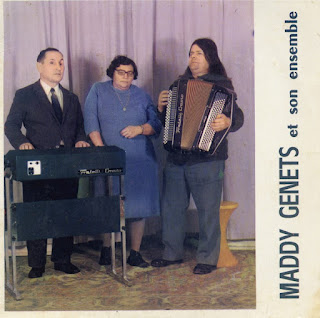 For today’s posting, I bring you one of those records that is a staple of those endless ‘worst album covers of all time’ lists but which has, until relatively recently, proved nigh on impossible to track down. Perhaps that’s because Maddy Genets et son Ensemble is not an album at all, but a four-track EP.

The entire Maddy Genets discography appears to consist of two Eps and one 45, issued by Le Kiosque d'Orphée in Paris, a custom pressing label for recordings made at a small studio at 20, Rue des Tournelles, a couple of blocks from la Place des Vosges, in a gorgeous art nouveau building that now houses a second-hand shop called Sissi’s Corner. All three releases are as rare as Maddy’s teeth, judging by her inability to crack a smile in the portrait that appears on the cover of this particular EP.

The other two releases are credited to Maddy Genets Et Ses Accordéons, although the trio that makes up the group appears to be unchanged; Maddy, her husband, and a man I assume is their son. The name change I guess came about because Monsieur Genets moved from accordion bothering to thumping out a tune on an electric organ for the Maddy Genets et son Ensemble EP.

Both of these other discs come in identical sleeves, which probably means that Maddy and her family had a bunch printed and shoved discs in willy-nilly, depending on demand. All of the 10 songs distributed over the three known discs are standard tourist fare, which leads me to believe that the trio more than likely spent the early 70s busking outside Parisian attractions, shilling their discs from a suitcase on the pavement rather than through any stores. I have seen it suggested that some or all of the family were (or are) blind, which would have certainly helped their earning ability, and explained why they were unable to work out which record went in which sleeve, although as one correspondent asks, why would Maddy be wearing glasses if she were blind? Perhaps she was visually impaired, rather than completely sightless.

The music the trio played was perfectly acceptable; accordion instrumentals with the occasional verse sung by Maddy herself, and nothing like as awful as the covers might lead you to expect (or hope for). Perfect fodder for the tourists around Montmartre or the Marais.

Anyway, have a listen for yourself. Here are all four cuts from the 1973 EP Maddy Genets et son Ensemble, Acropolis, Petite Fleur, Dalila, and Solenzara. As always, if anyone reading this has any more information on Maddy and her family, I would love to hear from you.