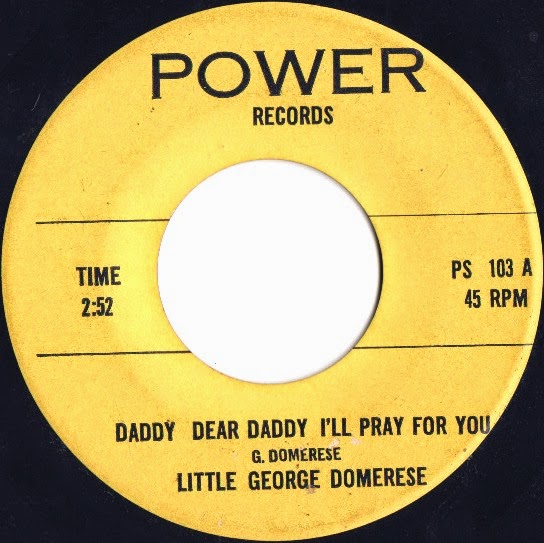 I originally discovered today’s selection on the wonderful blog Frances Favorite 45s which, sadly, hasn’t been updated for a while but is well worth checking out – especially if you have a taste (possibly bad taste) for obscure country 45s .
These days the owner of two gospel music radio stations in Arkansas (KMTL and KWXT), George Virgil Domerese – known professionally as Little George Domerese - has been broadcasting for more than half a century. He’s also made a name for himself by promoting country music shows on stage, including his Johnson County Jamboree which held a regular Saturday night spot at the Strand Theatre, Clarksville from 1958.


George began performing as part of a duo with mandolin player Carl Blankenship in 1956. The pair hosted a six-day a week, hour long show on KWHN until 1964 and, on his own, he fronted a country music hour on KFDF Van Buren (a station he owned for 34 years) which began around 1960.


Now 87 years young, married to Earla and with two sons (James and Timothy) and two daughters, at some point in the mid 60s George recorded this diabolically-awful self-composed 45, issued on the tiny Power record label, of Jonesboro, Arkansas.


And what a shocker it is. On Daddy, Dear Daddy I’ll Pray For You George pretends to be a small child praying for his father, who is fighting in Vietnam. At the end of this side of this manipulative piece of trash we find George’s Mom crying after receiving a letter, as the badly-plucked notes of the Last Post ring from George’s guitar. By the time you flip the record over for A Message From Daddy in Heaven, George’s daddy has become another casualty of the conflict. Yet even though he’s gone, he wants to reassure his scion that his prayers did not go unanswered.


Even if ‘daddy’ had gone to war at the outset of the conflict in 1956, George Domerese would have been 29 – hardly ‘just a little boy’. However both sides of the disc refer to the prohibiting of state sponsored prayers in US schools, which became law in 1963. That means that Little George had to have been at least 36 when he recorded this calculated slice of Christian propaganda.


I’m working on the assumption that he was known as ‘little’ George because he was (still is, I guess) short of stature. It is, of course, possible that he earned the nickname as a child performer, but if so why would he still be using the epithet well into his 30s? I'm not aware of any other recordings issued by George during his long career; there's nothing on iTunes, YouTube or Amazon, and a scour of the internets revealed very little information about George's career. If you know otherwise, do share.