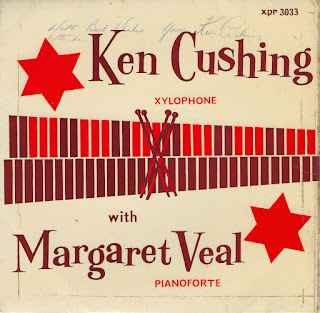 On my never-ending hunt for peculiar recordings, I often pick up things that look ‘different’, only to be disappointed. I cannot begin to count the number of times I have purchased a record just because I liked the otherworldliness of its cover simply to find something mediocre inside the jacket.

Today’s disc almost fell into that category, in fact, I had earmarked it for return to a charity shop or some such, but on closer inspection – and a good listening to – it proved to be not only worthy of my collection but also worth bringing to your attention, dear readers. And, as a bonus, it’s autographed by the main protagonist.

Ken Cushing Xylophone with Margaret Veal Pianoforte has to be one of the most peculiar Christian-themed records released in the UK, easily on a par with Marcy Tigner’s trombone albums. Who on earth ever thought that a man hammering away at a bunch of wooden blocks with a pair of mallets was going to lead sinners onto the path to salvation?

Searching for info, I discover that Mr. Cushing originally hailed from Halifax and had been playing xylophone professionally since at least 1942. He was still playing concerts for the Salvation Army into the mid-1970s, having himself relocated to the seaside town of Flamborough. Margaret Veal, a pianist from Abertillery in South Wales, also began her career in sacred music in the 1940s and often played Salvation Army concerts and fundraisers through until the early 1970s. 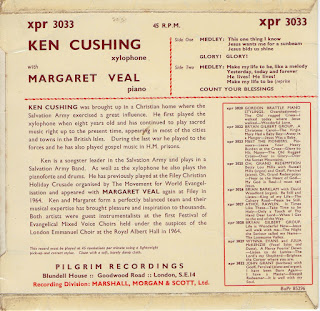 I also discovered that Ken and Marge had played together in Bristol, my hometown, in 1968. On 27 April of that year, the duo played a fundraiser for the Salvation Army Bristol’s Easton Road Corps, alongside the Bristol Easton Road Band and the Treorchy Male Choir. During the 40s Ken played in Gloucester, the city I was born in (and couldn’t get away from fast enough). Later He became involved with Christian Endeavour, an inter-denominational organisation which trains and equips young people to become church leaders. A woman called Margaret Veal worked extensively as a musical director and accompanist in the 70s and 80s, but I doubt that was our Marge, as her repertoire was decidedly more secular.

Issued by Pilgrim Records in 1964, the Ken Cushing Xylophone with Margaret Veal Pianoforte EP appears to have been Ken’s sole release, although he did appear on recordings by other artists, including the 1976 album by the Cambridge Heath Songsters, May Jesus Christ Be Praised! Ken’s photo appeared on the back of the album sleeve, even though he only performs on two songs. The same year that this EP was released, Ken and Marge played together at the inaugural Festival of Evangelical Mixed Voice Choirs at the Albert Hall, a huge choir festival that would grow to incorporate thousands of voices.

Here are both sides of this oddity. Enjoy!