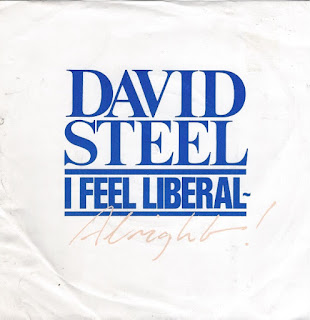 Politics. Haven’t you had enough of politics?

Not only is the Leader of the Free World™ a racist, misogynistic simpleton, Britain now has it’s own Mini-Me Trump in the shape of BoJo the Clown, a man who has successfully lied and cheated his way to the top, aided by a party so desperate to cling on to power that they’d shove their own granny under a big red bus (emblazoned with more lies about where your money goes) to do so. The world is going to hell in a handcart… so we may as well go out singing.

Issued in 1982 and masterminded by one-time hitmaker Jesse Rae, I Feel Liberal (Alright) was an attempt to get Scottish politician and then-leader of the Liberal Party David Steele into the pop charts... and perhaps install him as Prime Minister into the bargain. And it’s horrible. A funky little tune with a stupid chorus and a few quotes from a Steele speech (given, if memory serves, at a Liberal Party conference) stapled on, the song even came with its own dance, the Steel Step, with instructions on the reverse of the sleeve. Steele's profile was at an all-time high: his party had recently entered into an alliance (referenced in his 'vocal') with the SDP, and the two parties would go on to win 25 percent of the vote at the next General Election.

The flip side, credited to Luzuli (the name of Rae’s publishing company), was simply a version of the a-side with Steel’s ‘vocals’ erased. The disc was issued to coincide with the Party Assembly in Bournemouth. Unsurprisingly it did not sell well, making copies quite hard to find these days. David Steel would not become PM, although he would eventually be elevated to the House of Lords. 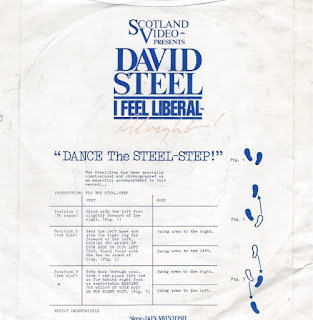 Rae, who wrote and produced the disc, performed on it and issued it on his own Scotland Video label, had a minor hit in 1985 when his follow-up single Over the Sea, was picked up for national distribution by WEA. In the same year that I Feel Liberal was issued Rae had his biggest success, writing the number three hit Inside Out for soft soul act Odyssey. The self-styled “funk warrior” and former farmer from the Scottish Borders town of St Boswells had a penchant for hanging about in full clan regalia, and his self-funded pop videos, shot in dramatic rural landscapes were alleged to have inspired the look of the Highlander films. A long-time supporter of Scottish independence, Rae ran, unsuccessfully, for the Scottish Parliament in 2007 and 2011. In 2015 he attempted to stand for election to the House of Commons – as an independent, naturally - but wasn’t permitted to take his signature claymore (a traditional Scottish variant of the late medieval two-handed sword) into the polling station. He’s still performing and recording today.

Anyway, here are both sides of this ridiculous record. My thanks to Mr. Weird and Wacky for the sound files, and to 45Cat for the images.

Email ThisBlogThis!Share to TwitterShare to FacebookShare to Pinterest
Labels: David Steele, I Feel Liberal, Jesse Rae, Over the Sea, Politics