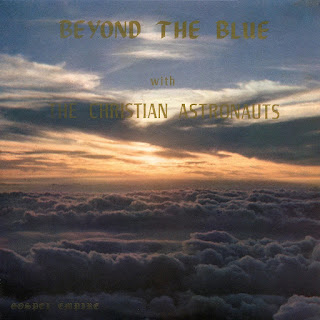 In twelve years, and in over 540 posts (this is, in fact, blog post 543) how on earth (pun intended) have I managed to ignore writing about the Christian Astronauts, otherwise known as the Shoup family from Fremont, Ohio, and their one classic album Beyond the Blue?

I did include them in a write-up on Christian music in The World’s Worst Records Volume One, but for those who have not read the book yet, let me introduce you to one of the weirdest and most wonderful records this side of Into Outer Space with Lucia Pamela.

This delightfully amateur outer space epic first appeared in 1971. Dean Shoup (referred to on the album’s liner notes and throughout their 10-year career as Captain Shoup), like Marcy Tigner, was a self-taught ventriloquist who realised that America's fascination with space travel could provide him with a platform for spreading the gospel. 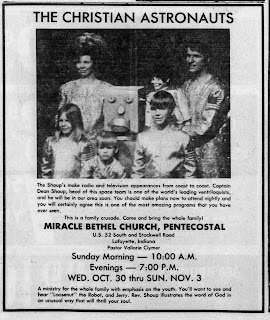 Advertising himself as “one of the world’s leading ventriloquists” and as a “gospel magician” (whatever that may be), Dean and his family toured America and filmed more than 300 episodes of a cable-TV children's ministry programme, also called Beyond the Blue, which was broadcast in the Washington state area. The cast included his wife Connie (a.k.a. Sister Shoup), kids Rick and Michelle (also known as Shelly), Jerry (a shrill-voiced ventriloquist’s dummy) and his grandmother, and starred a seven-foot tall robot, Loosenut, apparently fashioned from cardboard boxes and tin foil but which came equipped with flashing eyes and moving arms and who sounded, unsurprisingly, exactly like the good captain. In 1972, after the album was released, the family would be joined by their third and last child, son Brent. sadly I have been unable to find any footage of the TV show... but I'm sure it's out there somewhere.

The brilliance of Beyond The Blue lies, in part, to the obvious lack of money spent on the project: Captain Shoup provides all of the sound effects as well as the voices for the non-human members of the ship’s crew and the album’s narrative content, while Sister Shoup’s whole raison d’etre seems to be to chirrup through a handful of hymns.

According to the sleeve notes: “Capt. Shoup is in the pilot seat and Loosenut is the co-pilot. Lt. Green is sitting at the computer giving us assistance in helping us to stay on course, using the Bible for the flight manual”. It’s childish, cheap and utterly charming: Captain Shoup’s stumbling delivery only adding to the album’s appeal. 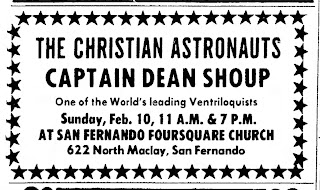 Despite the Christian Astronauts delivering their last earthly sermon in 1981, it’s my hope that the Shoups, Jimmy, Granny and Loosenut are still out there preaching the good word in a galaxy far, far away. Originally issued by Gospel Empire Records, the album received a limited reissue, on CDR, from outsider music specialists Companion Records a few years ago, fully endorsed by Captain Shoup himself. Sadly, this has now sold out, but you can hear a couple of tracks here, My Heart Is Reserved (sung by Rick) and I’ll Never Be The Same (sung by Michelle).

Email ThisBlogThis!Share to TwitterShare to FacebookShare to Pinterest
Labels: beyond the Blue, christian, Christian Astronauts, I'll Never Be The Same, Into Outer Space, My Heart Is Reserved, robots, The World's Worst Records Volume One, ventriloquism