A Song-Poem Valentine (or Two) 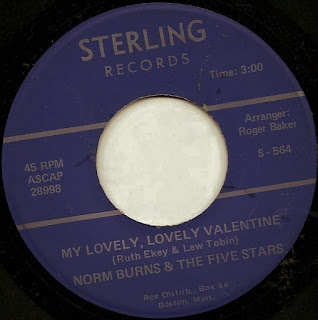 A couple of Valentine-themed song-poems for you today: if you’d like to hear more can I suggest you check out this week’s World’sWorst Records Radio Show – a two-hour special featuring 60 minutes of vomit-inducing Valentine’s songs.

First up is a corker from the Halmark stable, credited to Bob Storm but actually featuring him duetting with Halmark’s ‘other’ (i.e. not Mary Kimmell) female singer, Dodie Frost. You can kind of forgive the ridiculous lyrics to Valentine’s Song as their composer, Kiro Obetkovski, clearly did not have English as his first language. With a co-composer credit nabbed by Halmark head honcho Ted Rosen – a bit of a liberty if you ask me, as he’s simply used one of the company’s clapped out song beds again – it’s an absolute hoot.

Born in 1943 in Macedonia, and currently (I believe) a resident of Indiana, Kiro Obetkovski, fancied himself a bit of a poet and, as O Kiro, self-published a slim volume – Alexandar’s [sic] Best Poems - in 1977. If the dreadful lyrics to Valentine’s Song are anything to go by, then that book must be essential reading.

Next is Norm Burns and the Five Stars and My Lovely Lovely Valentine, another effort from Lew Tobin’s Sterling label. Like Rosen, Tobin had a penchant for taking credit for the music on many of his song-poem releases; unlike Rosen, Lew at least attempted to compose something original most of the time. The lyrics to My Lovely Lovely Valentine are by Ruth Ekey, who also wrote the words to a couple of other songs copyrighted in 1973, Walkin’ Down a Country Road and I Sing to Keep From Crying. This particular disc appears to have been issued in 1972.

Thanks to Bob Purse for the image!