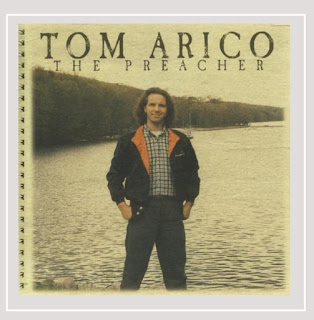 A recent discovery, and someone I shall be featuring over the coming weeks on the World's Worst Records Radio Show.

Currently living in Raleigh, North Carolina, Tom Arico is a New England musician who, tired of taking a back seat in cover bands, decided to set out in search of stardom, recording a series of EPs and his own full-length album – the Preacher – during the late 80s and into the 90s.

Originally from Bethel, Connecticut, his song Baby On the Way – issued in 1989 - became a turntable hit with some college radio stations (and especially DePaul University in Chicago), thanks to what can only be described as his ‘unique’ performance style. Tom is a proficient rhythm guitar player, but his odd, high-pitched nasal vocal will not be to everyone’s taste. A quick search of the ‘net will turn up thousands of references to Tom’s work, very few (if any) of them complimentary. Irwin Chusid is a fan: that should be recommendation enough.

In fact, the only person who consistently praises Tom’s work is Tom himself: his CDBaby page lauds him as ‘One of New England's finest rock artists’. The cheeky monkey even appears to have faked a wildly ecstatic audience going nuts during a live performance of his signature tune, The Preacher, at a concert in Jerusalem. As one on-the-ball Amazon reviewer was quick to point out, that same audience was equally ecstatic when they saw the Kinks perform Lola, for Tom seems to have lifted his stadium full of fans from One For The Road, the Kinks’ 1980 double live album.

Like many outside musicians, people question whether Tom knows just how good – or how bad – he is. He appears to be very serious about his work, but then you know that he has to be in on the joke when his latest YouTube video features a cover of the very same Ray Davies song.

He’s still out there strutting his stuff today, appearing regularly at open mic nights in and around New York State, and if you want to hear more a 20th anniversary reissue of The Precaher is available from CDBaby, Amazon and all good outlets.