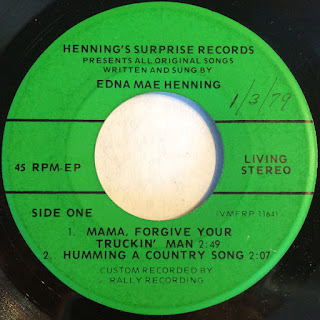 A couple of tracks today from the gloriously off-key Edna Mae Henning, pianist, empress of Henning Surprise Records and songwriter of the most authentic country-western songs you’re ever likely to hear.

What do we know about Pennsylvania housewife and outsider musician Edna Mae? Not a lot, actually. Born Edna Mae Wynegar, it appears that she had been bitten by the songwriting bug by the early 1970s, registering copyright for her compositions If You See My Baby, It’s Love, Love, Love and Walking and Talking Over You in 1973. She would later record If You See My Baby for her debut EP, released in 1979. Edna Mae would go on to issue at least five self-financed 45s and a couple of EPs between 1979 and 1988 (by which time Henning Surprise Records had simplified their name to Surprise), and in 1985 was placed third in the ‘over 21s’ group in a local talent competition.

In the late 1980s, having had no success with her recordings, despite having sent thousands of free copies to radio stations across the States, she fell victim to one of those unscrupulous ‘print your poetry for cash’ schemes. Operating for decades, these scams work in exactly the same way as song-poem enterprises, only this time instead of getting a few copies of a recording for your money, Edna instead saw her poem Abortion (yes, it’s exactly what you would expect) printed in a volume luxuriating in the title Great Poems of the Western World Volume II in 1990. It seems that Edna Mae decided not to cough up the few extra bucks to have her photograph included alongside her words. Three years later the publishers of that book went bankrupt.

I believe she’s still with us, still living in Pennsylvania, surrounded by children, grandchildren and great-grandchildren. Apparently Edna was still recording her own compositions as late as 2011 and, according to a post on the Waxidermy blog back in 2008, claimed at that point to have penned some 10,000 songs.

I love the sound of her discs: the upright piano and yearning vocals put me in mind of barroom ballads of the old West. I picture her in Victorian garb, lots of lace, banging away at a honky-tonk piano in the corner of the room while cowboys and prospectors drink, gamble and brawl, Edna Mae occasionally ducking out of the way of a flying bottle or stray bullet, valiantly playing on.

From her debut EP, issued in January 1979 (which, just to confound discography compilers, has the company credited Henning’s Surprise Records on the A-side; the flip features no apostrophe), here’s Mama, Forgive Your Truckin’ Man and, from the topside of her 1985 single, I Can’t Get Over You. For this, Edna moves from piano from her trusty upright to an odd-sounding synthesised keyboard: it’s her ‘Dylan goes electric’ moment.

Email ThisBlogThis!Share to TwitterShare to FacebookShare to Pinterest
Labels: Abortion, Edna Mae Henning, I Can't Get Over You, Mama Forgive Your Trucking Man, Vanity