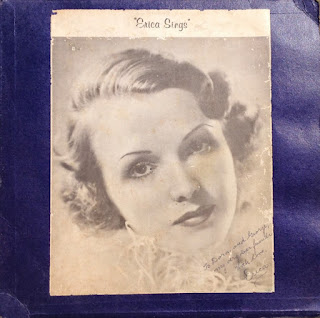 The name Alice Armand may not mean much to you, but if you’re a fan of 1930s cinema the chances are you’ve seen her face.

Born on 15 December 1890, as Erica Herrmann, and known to her family as ‘Ricky’, when she was still a teenager she married a New York policeman, becoming Mrs Erica Newman.

It was as Erica Newman that she first struck out for fame. After appearing in several Broadway shows, she arrived in Hollywood at the dawn of the Talkie era. Erica appeared in a couple of movies (including The Girl Habit with Paulette Goddard) and several shorts, including a musical showcase for singer Rudy Valee at Paramount in 1929, and a Jack Haley short (1930s the 20th Amendment), but found it hard to compete, so returned to New York where she took up modelling.

But acting was in the blood, and seven years later Charles Goetz signed her to 20th Century, in the process changing her name to the slightly more exotic Alice Armand.

By the time she got her second crack at Hollywood Ricky was already in her late 40s, far too old for the ingénue roles she once longed for. Instead, she was cast in a variety of minor character roles, as a secretary, a model, a clerk. Her biggest role came in the 1940 bio-pic Lillian Russell, playing one of Russell’s sisters. That same year she appeared in two Shirley Temple vehicles, the hit fantasy the Blue Bird and Young People, Temple’s last movie for 20th Century Fox, who allowed the future diplomat’s contract to expire aged just 12 years old. Sadly, the did the same to Ricky: she would not appear in a Hollywood movie again.

Leaving any hope of stardom behind her, she and her husband retired to a small farm in the Adirondacks, to be nearer to family, and the couple lived a quiet, contented life, Aunt Ricky enchanting her nephews and nieces with tales of her life in Hollywood.

Erica Sings, her one and only album, appeared around 1960. Self-recorded, self-financed and self-distributed, Alice even created her own company, Erica Records and handcrafted the sleeves, gluing a vintage photograph of the actress in her Hollywood heyday to the front of the cover.

It’s a thoroughly bizarre and rather wonderful album and, from the subject matter, I would imagine that she wrote the songs over a prolonged period. Over 14 tracks, Ricky sings her own self-composed songs, plays Hawaiian-style guitar and even drags her brother in to sing on one song. Recorded in the family home, the songs have a wonderfully old-fashioned, almost ethereal feel; she would have been close to 70 when these recordings were made.

Here are a couple of cuts from this magnificently odd – and rare -record, the delightful Mommy Do They Shine Up Shoes In Heaven? and the ghostly To Hawaii’s Shore.