Neither of Them Are Just Soldiers 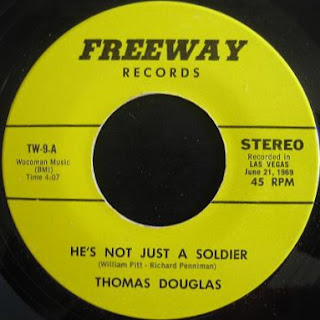 A real oddity for you today, a rare cover of an obscure Little Richard track, but one that has been taken to another level altogether.

The anti-war polemic He’s Not Just a Soldier was originally recorded by Little Richard, co-composer of the song as the flip side to his 1961 Mercury 45 Joy Joy Joy; it also appeared on the album The King Of The Gospel Singers: Little Richard, issued the same year. The single did not do well, stalling at 113 on the Billboard charts.

Recorded in Las Vegas, Thomas Douglas’s version, complete with an utterly ridiculous preamble, appeared in late 1969, updating the song to include overt references to America’s involvement with the war in Vietnam. When Richard recorded his version, the US were already participating in the conflict, however by 1969 protesters were demanding an end to the war and that the American government bring the troops home. It was a different world, a world that needed a different version of the song. 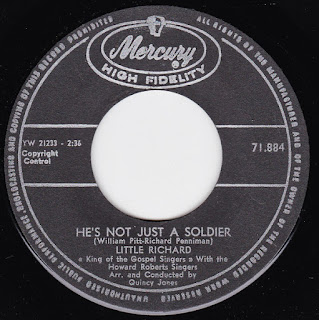 So, who was Thomas Douglas, the man credited for recording this, his only 45? Well, like me you will probably struggle to find much information about Mr Douglas elsewhere, because he doesn’t exist. Thomas Douglas was in fact two people, Tom Willett and Doug Rockwell and, although uncredited, the added spoken word passages must have come from the febrile minds of Tom and Doug themselves. Backed with their unique cover of the gospel standard He’s Got The Whole World (In His Hands), unsurprisingly this too failed to chart although, as Willett says, ‘We received a lot of airplay in Las Vegas and in some Texas markets’.

Willet also recorded several sides for Freeway, the label that put this out, under the name Herman Schmerdley and is still about today, regularly posting videos – a mix of product reviews, piano lessons and stock trading tips - on his popular YouTube channel, Featureman.

Here are both versions of He’s Not Just a Soldier (I know which one I prefer) plus the b-side to the Thomas Douglas 45, he's Got the Whole World (In His Hands)

Email ThisBlogThis!Share to TwitterShare to FacebookShare to Pinterest
Labels: he's Got The Whole World In His Hands, He's Not Just a Soldier, Little Richard, Thomas Douglas, Vietnam