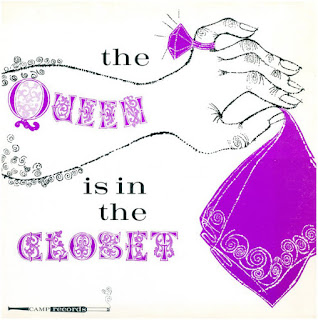 Happy Pride month everybody! To celebrate I thought I would relate the story of one of the oddest – and queerest - record companies of all time, Camp Records. If you have read the World's Worst Records Volume One or David Bowie Made Me Gay then much of what follows will be old hat to you: but bear with... or simply scroll on down to the two tracks at the foot of the post!

In the dark days before the Stonewall riots and the Wolfenden report you would never see LGBT people portrayed in a positive way in the media. Certain gay stereotypes (especially that of the effeminate man) were routinely exploited as source material for comedians, and camp characters often appeared in movies and on TV. LGBT people were used to being ridiculed, but away from prying eyes, a gay subculture sprang up: an underground social network where men and women conducted their lives away from the public and the police. LGBT people had their own places to go, their own language to use and their own entertainment to enjoy – from the politically subversive to the outrageously arch.

In 1959 the American men’s magazine Adam began a series of stag party albums. There appear to have been about a dozen, put out by the Fax Record Company – a company that specialised in sex in its many forms. These discs, by mostly-anonymous performers, usually featured a mix of ribald songs interspersed with slices of blue humour, although they also issued a series of documentary-style albums, including Nights of Love on Lesbos, which was subtitled a Frankly Intimate description of a Sensuous Young Girl’s Lesbian Desires. Sold under the counter in specialist shops and through adverts in men’s magazines, these albums spawned many imitators, including those issued by the British company No Holds Barred, with many companies eager to jump on the bandwagon. It’s here, in the land of slightly risqué mail order, that the Camp label was born.

Although in the strictest sense the modern-day use of the word camp derives from the French se camper (to pose in an exaggerated fashion) this flighty, limp-wristed aesthetic got its name from the acronym KAMP, an effeminate man who was Known As a Male Prostitute. The actor and comedian Kenneth Williams wrote that ‘To some, it means that which is fundamentally frivolous, to others the baroque as opposed to the puritanical and to others – a load of poofs’ (The Kenneth Williams Diaries, edited by Russell Davies, Harper Collins 1993) and he should have known: the closeted Williams and his out companion in comedy Hugh Paddick (who spent the last 30 years of his life with his partner, Francis) made a bona little living, thank you very much, as the über- camp Julian and Sandy, stalwarts of the hit Brit radio show Round the Horne.

Originating from a company called Different Products Unlimited in Hollywood, California, Camp Records (run by the elusive E. Richman) specialised in producing gay-themed novelty records which they advertised, under the banner ‘racy . . . ribald . . . madly gay . . . way out!’ in the back pages of publications such as Drum: Sex in Perspective (a revolutionary magazine from the Janus Society with a national circulation of around 15,000), One and Vagabond, a mid-’60s catalogue aimed exclusively at gay men. Mail-order businesses that specialised in gay and lesbian books, such as Washington DC’s Guild Book Service (run by gay publishing pioneer H. Lynn Womack), San Francisco’s Dorian Book Service and Philadelphia’s Lark Publications also carried stock of the discs. The releases were, naturally, ‘shipped postage paid, in sealed plain package’. Described by their own press releases as ‘wilder, madder (and) gayer than a Beatle’s hairdo,’ Camp Records issued ten 45s. None are dated, but according to correspondence on the company’s headed notepaper, the first two releases (the single Leather Jacket Lovers and album The Queen Is In The Closet) were issued around July 1964. What is certain is that no new releases appeared from the company after late 1965. The material typically consisted of parodies of well-known songs with their lyrics rewritten to reflect a camp sensibility – I’m So Wet (the Shower Song) is a rewrite of the French folk song Alouette; London Derriere is a rewrite of Danny Boy (or Londonderry Air, geddit?) – or new songs in various styles including rock ‘n’ roll (I’d Rather Fight Than Swish and Leather Jacket Lovers), Sinatra-style crooner-pop and Latin jazz. 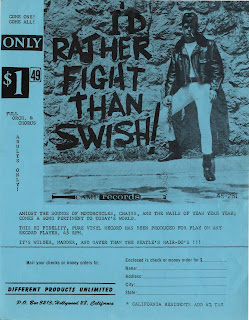 Depending on how you view these things these records are charming period pieces, badly dated Carry On-style comic cuts or complete anachronisms of a thankfully-bygone age.  Lispy, wispy and fey, and about as sophisticated as a hammer blow to the head the humour, such as it is, is broader than the backside of the average McDonald’s customer. The lyrics comically portrayed homosexual subculture using broad stereotypes, gay slang and double entendres. Where artists are credited their names are jokey: Byrd E. Bath & the Gay Blades, Sandy Beech, The Gentle Men. The name Rodney Dangerfield crops up on several releases, he’s even credited as performing the tap-dancing solo on Homer The Happy Little Homo (‘a daring, madcap romp right from the pansy patch,’ went the advertising blurb for that particular oddity), but this is a pseudonym that had been in popular use for at least three decades prior to its appearance in the Camp catalogue, not the late Jewish comedian who found mainstream fame in frat house flicks in the 80s. Jack Benny had used the same name for a character on his 40s radio show.

It’s no surprise that the performers and producers of these discs were happy to go about their work uncredited. In fact, it was important that the entire operation was kept as anonymous as possible in order to avoid trouble: the company was operating in a time when the production of recordings like these could lead to arrest for possession and distribution of obscene material. Different Products were only contactable via a PO Box number: Richman kept an office on Hazeltine Avenue, Van Nuys, but no address or telephone number appeared on the company’s letterhead.

Camp Records also released two full-length LPs: The Queen Is In The Closet, which consisted of ten songs culled from the singles, and Mad About The Boy, a collection of ten popular torch songs which would usually be sung by a woman but recorded instead by a male vocalist without changing the song's gender. This produced what the album’s sleeve notes called ‘a wonderful potpourri of love songs done in a most unique way’ and, unlike the rest of the releases on the label, this album eschewed the campness for a much more ‘straight’ approach.

‘The primary reason for doing this album,’ the anonymous author of the sleeve notes wrote ‘was to prove that good songs could and should be sung by everyone. Gender should not be the determining factor as to who should sing what.’ A bold statement for the time. Two years before Mad About The Boy was issued, a similar album, Love Is A Drag, had appeared on the Lace Records label, featuring 12 songs including The Boy Next Door, Can’t Help Lovin’ That Man and, of course, Mad About The Boy. The cool, sophisticated torch song singer on Love Is A Drag (subtitled For Adult Listeners Only: Sultry Stylings By A Most Unusual Vocalist) was finally revealed (by LGBT archivist JD Doyle) as Gene Howard (born Howard Eugene Johnson in Nashville, Tennessee), a straight, married professional singer who had worked with a number of big jazz names including Gene Krupa and Stan Kenton.

No performers are credited on the two Camp albums, although the sleeve notes to Mad About The Boy – and flyers issued by the company - allude to some pretty big names being involved in what, for them, would have had to have been a covert project: ‘Unfortunately, we are not at liberty to give credit to the arranger and the many gifted artists involved in this production. However, to those with a discerning ear, you will recognise the stylings of some very fine and well-known personalities. Our male soloist is a delightfully gifted young man, whose name unfortunately must be withheld at this time. The vocal group used in this production is make up (sic) of four of the better known Hollywood T.V. and screen personalities. Here again, we are not at liberty to reveal true names.’ The front cover of Mad About The Boy features illustrations from another Different Products item, a desk calendar called Roy’s Boys: E. Richman and his co-conspirators seem to have felt that using these images would made the album appeal to an audience already familiar with Julie London’s 1956 album Calendar Girl.

Very few copies of these records were pressed: even fewer have survived the past half-century. Luckily JD Doyle,  curator of the Queer Music Heritage website (www.queermusicheritage.com), has collected all of these recordings together and made them available once again.

Here are a couple of Camp classics – Stanley the Manly Transvestite and Florence of Arabia. Enjoy!