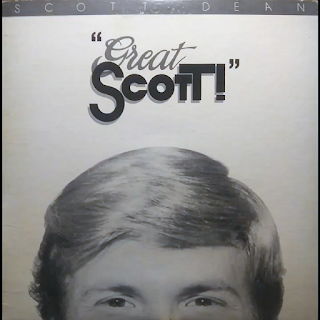 A pair of tracks today from an album I would desperately love to own a copy of. If anyone out there has access to the full album – or indeed owns a physical copy they would be willing to part with, do let me know.

The cuts come from Great Scott! the 1985 album by Scott Dean, ‘The sensational new recording star’, according to the reverse of the sleeve, who ‘was recognised as an up and coming singer even while attending high school in Wisconsin,’ winning ‘every award he sought after as well as awards he did not pursue’, whatever that gobbledegook means.

Scott Dean was born Scott Daehnert, in Kohler, Wisconsin, in 1961. Joining the Air Force at 18, Scott was stationed at the Nellis base in Las Vegas, and within six weeks of his arrival he had been taken ‘under the tutelage of the former international singing star Ben Lowey’ (it says here). Lowey was a vocal coach with a studio in New Jersey in the mid-1970s, advertising himself as ‘formerly with Columbia Records’. His official biography (dated 1979, and accompanying a home cassette course designed to help beat stuttering) states that ‘As a leading tenor Ben Loewy toured with a Schubert company in many famous operettas including New Moon, Student Prince, Showboat, Merry Widow and others. Before television he was under contract to Columbia Broadcasting System and also performed on Coast to Coast radio on NBC out of New York. He played a record 20 week run in Dallas for the Columbia Broadcasting System. He also performed in Grand Opera at the Manhattan Opera House, the New York Hippodrome and the New York Civic Opera Company singing La Traviata, Cavalleria Rusticana, Rigoletto and Lucia. He also performed in the lead roles in South Pacific, and the Most Happy Fella.’ Interestingly that brief bio mentions working for Columbia on radio, but not having recorded for them.

Was Mr L stretching the truth somewhat in his advertising? He certainly would not have been the first! He performed, as one of the Three B’s, with singers Bob Oglesby and Bill Lambert in the later 1930s; it appears that, after the war, Lowey went into the production side, working for Columbia and, later Audiograph Studios Inc. Later in his career he wrote the one-man musical Let My People Go, about the life of Paul Robeson, which was performed in Las Vegas and California by gospel singer Joe Carter, and he penned and produced a number of musicals and plays.

It seems that Scott met Ben around 1980, while he was still in the USAF (in 1981 he was back home in Kohler, heading a local recruitment drive): Lowey was in Las Vegas that year producing a stage show about Judy Garland. According to the sleeve notes, the maestro began schooling young Scott in opera and classical music and in 1982 Scott got his big break, winning the ‘Metropolitan Opera Auditions Saunderson Award, which is given only to young singers of outstanding merit and potential’. I cannot find an award with this name; however I have discovered that Alexander and Louise Saunderson were Met benefactors, and did indeed provide funding for audition awards.

Shortly after this it seems that Scott and Ben decided that opera was not the way forward, and that ‘it became apparent to Mr Loewy that his primary interest was in contemporary popular and rock music’. Lowey set up his own label, BLS (Ben Loewy Studios) and set Scott to work, recording a long players-worth of pop standards and recent chart hits. About this time Scott’s parents, Don and Pat, moved out to Las Vegas as well, presumably to support their son in his musical endeavours.

The results are here for all to hear. Well, two tracks are anyway (snaffled from YouTube), but I would kill for a copy of the whole album. Recorded in 1985, the same year that Scott appeared as the opening act for Bobby Vinton in Sheboygan, Wisconsin, two other tracks from Great Scott!, Nobody Loves Me Like You Do and The Sands of Time were also issued, in a rather fetching picture sleeve, as a 45, again on BLS.

Sadly, fame did not beckon for Scott. By 1990 he had given up on any hope of making it in the recording industry, instead taking a position as inventory control manager at Arizona Charlie's Hotel and Casino (now Arizona Charlie’s Decatur). In June 1990 he married his high school sweetheart, Lisa Ann Wagg, in Las Vegas. The pair later moved back to Wisconsin: by the end of the decade Scott, having reverted to the family name, was an employee of the Sheboygan Paper Box Company.

Here, as promised, is a brace of tracks from Scott Dean’s Great Scott!: What a Feelin’ (the theme from Flashdance) and I’m So Excited. Scott, if you’re out there and happen upon this post, I salute you!