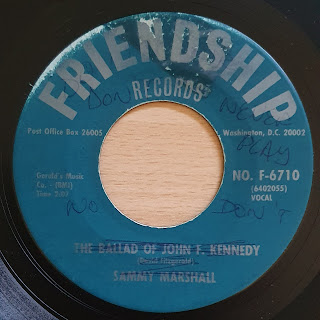 I’ve finally begun the arduous task of digitising my entire song-poem collection. It’s a job that will take months – I have hundreds of song-poem 45s and dozens of albums – but I reckon it will be worth it, for it’s already throwing up some great stuff that, as far as I am aware, has not been shared on the internet before now.

Today’s offering is the first of the fruit of that labour.

Sammy Marshall was the go-to male singer at the Globe recording studio in Nashville, Tennessee, and it is he who performs the two tracks I’ve selected for you today, both sides of a disc issued – one can safely assume – in early 1964: The Ballad of John F Kennedy and Physical Fitness.

I love this disc, especially the biro scribbles on the A-side label, warning the disc jockey: ‘Do Not Play’, ‘Don’t’, ‘Never Play’, and, simply, ‘No’! Poor David Fitzgerald, who composed the lyrics for the two songs, would have been heartbroken if he had ever seen that. The flip is simply described as a ‘bomb’. Now usually the phrase ‘it’s a bomb’ means the same as ‘it’s a smash’, but in this case I’m assuming that whoever wrote that word wanted to convey another meaning! It’s not a bad song, but severely dated for 1964.

Sammy Marshall performed under a series of different names, including every-so-slightly altered versions of his own moniker - Sonny Marshall, Sonny Marcell, Sonny Maracel, and even the exotic-sounding Le Son Y Marshall – as well as Ben Tate (usually for Ronnie Records), Chuck Jones and Johnny Evans. There are many more. His laid back, slick lounge style was perfectly suited to the average song-poem offering, although there are a few offerings where he achieves a perfect teen sound, aping any of the endless number of toothy blond pop sensations of the late 50s or early 60s. 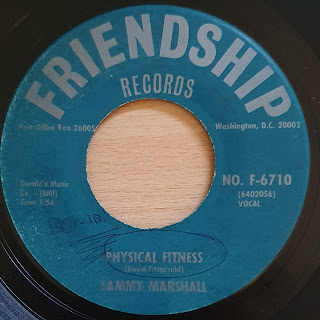 JoAnn Auborn was Globe's first female vocalist. She also appeared under the names Joan Auborn, Kris Arden, and Damita (not Damita Jo). I have a song-poem 45, on Frank Lyle Buck Records, credited to The Mystery Girl, another of JoAnn’s pseudonyms. On that particular disc (the flip side of which features Sammy Marshall) she is accompanied by Al Auborn on piano. Her husband, or her brother? After JoAnn’s tenure, a singer called Mary Kaye (not the same singer who fronted Vegas-based recording act the Mary Kaye Trio) took the mic for the later years of Globe's run.

As well as operating their own demo recording facility and small label, Globe recorded hundreds of sides for vanity releases on custom labels, as well as operating a lucrative song-poem business. Operated by Jim and Glenna Maxwell, Globe tended to work for what Phil Milstein, at the American Song-Poem Music Archives, calls ‘individual customers who wanted to pretend to be a record company for a little while, handled occasional overflow work for some of the larger song-poem companies, such as Air and Preview, and contracted out record pressing for Halmark. Because their work pops up under so many different names and so rarely under their own, they have become something like the Zelig of song-poem concerns.’

So, here are The Ballad of John F Kennedy and Physical Fitness, performed by Sonny Marshall. Oh, and why did I choose to title today’s post ‘A Sound Reputation‘? That was Globe’s motto, which appeared as part of the company logo.