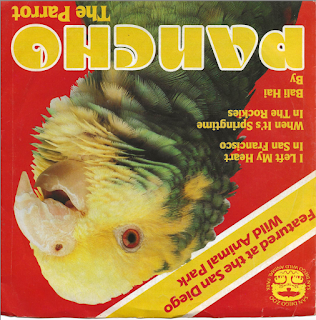 Regular Blog reader Dave Schmidt has been kind enough to send me several tracks recently, and today’s pairing comes from his collection. so it’s him you should be either thanking or cursing, depending on your standpoint!

Pancho the Parrot, ‘the amazing parrot with the voice of an opera star’ was one of the major attractions of the San Diego Wild Animal Park’s Bird Show. Making his debut at the park in 1979, along with his friends Bobby and Lolita, Pancho – a Mexican double yellow-headed parrot - would squawk his way into visitors’ hearts. Pancho and his pals became celebrities in their own right, with the taloned talent appearing on a number of TV shows, including The Tonight Show with the legendary Johnny Carson, That’s Incredible and the Mike Douglas Show.

In April 1981 the feathered friends released their sole 45, the A-side of which features Pancho – accompanied by an unnamed vocal group, ‘singing’ a medley of popular tunes, to whit I Left My Heart in San Francisco, When It’s Springtime in the Rockies and Bali Hai. The flip features Bobby (an African grey) and Lolita (a yellow-naped Amazon) squawking their way through a song called, perhaps unsurprisingly, Bobby and Lolita, a cheap and shameless rip-off of Barry Manilow’s Copacabana (At the Copa). The disc came about after Escondito DJ Clip Helps (what a great name!) of Radio KOWN telephoned the park’s bird trainer and had Pancho sing When It’s Springtime in the Rockies live on air.

Selling for $3.50 in the Parks’ gift shop, within a few months the disc had sold over 4,000 copies. Such was the demand for this souvenir soundie that a cassette version was issued as well, although it seems that neither Pancho, Bobby nor Lolita were ever called upon to record a follow-up. Perhaps the parrots were a one-trick pony?

Anyway, here are both sides of this marvellous monstrosity. Dave’s copy of the 45 appears to be slightly off-centre. adding an extra dimension and a wonderfully ethereal feel to the whole thing. If you want one with less wobble, the tracks are readily available on YouTube.

Email ThisBlogThis!Share to TwitterShare to FacebookShare to Pinterest
Labels: bali Hai, Barry Manilow, Bobby and Lolita, I Left My Heart in San Francisco, Pancho Sings, Pancho the Parrot, singing animals, When It’s Springtime in the Rockies