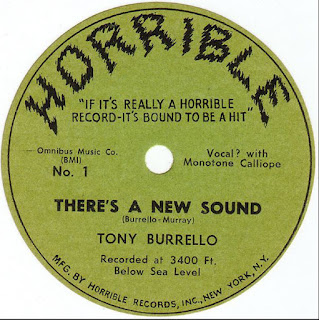 Here's a classic I've not included on the blog before, despite having written about the artist on the B-side... and it also gives me a good excuse to look into the work of pianist, composer and music teacher Anthony Tamburello.
Known professionally as Tony Burrello and Tony Burrell, Tamburello is probably best known around these here parts for his novelty release There’s a New Sound, the flip side to the Leona Anderson (incorrectly credited at Leonna) classic Fish.

Issued in 1953 on their own Horrible Records, There’s a New Sound and Fish were both written by Burrello and Tom Dwight Murray, although Burrello had been writing (both solo and with Murray) since at least 1950, while still working as a teach at New York’s Anthony Scotti School of Music, Drama and Dance.

Murray and Burrello (variously credited as Burrell or as Anthony Tam Burrello) had worked together for several years, with a slew of novelty songs to their names, including Pastafazool, I Didn’t Want To But I Did, and Fulton’s Folly Blues. But major success eluded them, until There’s a New Sound gave them the breakthrough they had been looking for. Time called the song 'an unrelenting and fairly unforgettable satire on such gimmicks as echo chambers and dog barks', and reported that, after an intial pressing of just 500 copies, the pair had received orders for 100,000 more. In August 1953 Billboard reported that the pair were now in great demand, and ‘experiencing a windmill of activity’. Soon they were writing for Tony Bennett, and they even turned their hands to writing commercials, penning several tunes for Coca Cola. 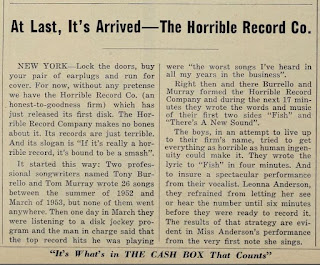 The duo continued to work with Leona when she moved, first to Columbia Records and then to Unique, with Burrello co-writing Limburger Lover (with Simon) and Rats in my Room with Murray. In the same year as …Worms, Murray and Burrello had also written God Bless Us All, a sugary-sweet kiddie ditty recorded by a number of artists including Spike Jones (with vocals by George Rock), Brucie Weill, Jimmy Boyd, Mollie Bee and Baby Pam. and covered in the 1980s by NRBQ.

The following year, Burrello and Murray composed How Do You Want Me To Sing My Love Song?, a novelty for singer Larry Foster on which Foster imitates several big-name singers of the time, including Nat “King” Cole, Al Jolson and Perry Como. The flipside, A Trip to Hollywood, featured Foster imitating a number of movie stars, including Edward G. Robinson, Cary Grant, and Jimmy Stewart.

After working with Leona, Burrello moved back to his first love, jazz, issuing several albums including Jazz a la Waller, on the tiny Manhattan Productions label (also available on Cambridge Recordings as Salute to Fats Waller) with his own Tony Burrello Trio, as well as accompanying Broadway star Pat Northrop on the LP I Love New York. In the late 1950s the Tony Burrello Trio issued at least two 10” LPs, Selections from Oklahoma and South Pacific and The Songs Of Hoagy Carmichael, on the British budget label Solitaire, which appear to have been licensed from the US owners of the masters, rather than recorded in Blighty. He continued to work with Tom Murray however, the duo writing material for singer Jerry Vale (for his 1963 season at New York’s Copacabana club),

Under his given name, Burrello has achieved lasting fame with cult TV fans and library music aficionados by composing the instrumental Party Dress, a tune featured in Arrival, the opening episode of the Prisoner, but which first turned up on a Chappell Recorded Music 10” in 1957.

After a long and varied career, which included time in the studio with Sinatra and tours with Tony Bennett, Tony Burrello died in September 1992.

For an insight into Tony’s work in the novelty field, here he is with the magnificent There’s a New Sound, plus Baby Pam and the sickly God Bless Us All, and Larry Foster with How Do You Want Me To Sing My Love Song?

Email ThisBlogThis!Share to TwitterShare to FacebookShare to Pinterest
Labels: Baby Pam, Fish, God Bless Us All, How Do You Want Me To Sing My Love So, Larry Foster, Leona Anderson, There's A New Sound, Tom Murray, Tony Burrello