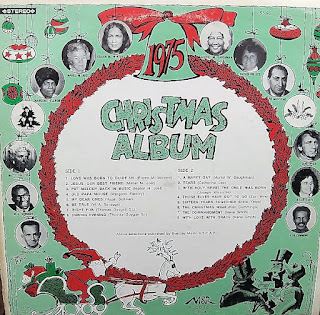 Welcome, everyone, to the first installment of this year’s Christmas Cavalcade. Yes, it’s December already, which means that every blog post between now and Christmas day will be given over to the discussion, and appreciation, of terrible yuletide tunes.

And what better place to start than with a magnificent Christmas collection from song-poem giant M.S.R.?

For those of you new to, or with just a passing acquaintance to, the genre, song-poems are paid-for recordings, where amateur lyric writers are encouraged, usually through semi-display advertisements in the small ads, to send in their scribblings (alongside a rather meaty money order, naturally) to companies who promise to turn them into potential hit singles. M.S.R. (the initials stand for founder Maury S. Rosen) is one of the giants of the song-poem world, and alongside Preview, Columbine and Halmark one of the most productive of all of the song-poem stables, producing in excess of 3,000 45s and 300 albums over its lifetime. 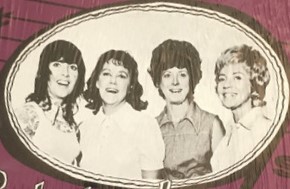 The tracks today come from M.S.R.’s 1975 Christmas Album, 16 songs from thirteen different writers (Thomas Guygax Sr., Mabel M. Jost and Nana Smith all contribute two lyrics apiece) issued, unsurprisingly, in late 1975. Nana Smith, who clearly forgot to send in her photo alongside her cheque, is the only author not featured among the baubles on the cover. The tracks are performed by the Sisterhood, M.S.R.’s go-to all-girl vocal group, which consisted of regular M.S.R session singers including Bobbi Blake. She also recorded as Bobbi (or Bobbie) Boyle, but I‘m not sure if that’s the same Bobbi Boyle from Encino, California who recorded a number of songs and appeared on the soundtrack to the Incredible Two Headed Transplant.

I’ve chosen to share a few tracks with you today: to be honest, like most of the Sisterhood alums this collection is a mostly dull affair, with that horrid washy synth sound that permeates M.S.R. productions from this period, but here are three of my favourites, Earl Wyer’s silly Those Elves Have Got To Go (the highlight of the album for me), Thomas Guygax Sr.’s typically wordy and peculiar During Evening and the Christmas Wish, written by Ken Cummings.

if you like these and want more, obscure music collector Sammy Reed posted the entire album on his blog a couple of years ago and it’s still available to download.

Email ThisBlogThis!Share to TwitterShare to FacebookShare to Pinterest
Labels: Bobbi Blake, Christmas, During Evening, MSR Records, The Christmas Wish, The Sisterhood, Thomas Guygax Sr., Those Elves Have Got To Go