Another Trip to Venus 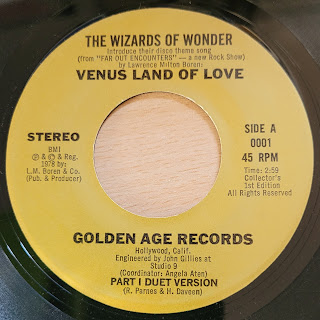 A short post today, but an interesting one (I hope).

Last April I wrote about a disc I was desperate to source, a little thing called Venus, Land of Love, composed by Lawrence Milton Boren and recorded by George Daines and Gloria Anne, as Kyra of Venus. Sadly, despite extensive searching and even the promise from one blog reader to rip MP3s of both sides of the disc I have still been unable to track the tracks down.

Well, just after Christmas, friend Bob of the always-excellent Dead Wax blog got in touch. He informed me that a related single was being offered for sale on a popular and well-known auction site. Needless to say, your intrepid blogger immediately purchased said disc. I should have waited: it cost me well over £20, including shipping from the States, and there's a copy right now on Discogs that I could have had for under a fiver! Ah well, here it is anyway, for all to enjoy.

It seems that, in 1978, almost 20 years after his first attempt to get his musical off the ground, Larry Boren had the idea to relaunch it, this time adding a disco beat to his songs in an attempt to make it more attractive to a contemporary audience. Originally titled From Venus, With Love, but now called Far Out Encounters, a band calling themselves the Wizards of Wonder recorded two new versions of Venus, Land of Love, an instrumental and a vocal, the latter featuring a duet from the mysterious duo of R. Parnes and H. Daveen. The disc was the only release from Golden Age Records of Hollywood... I assume

That's all I've got: there is absolutely no information whatsoever on the 'net about Larry Boren's second attempt to get his Venusian musical launched, or about the two mysterious singers credited on the A-side. As always, if anyone knows anything more, please do let me know.