It's Time For Eddy 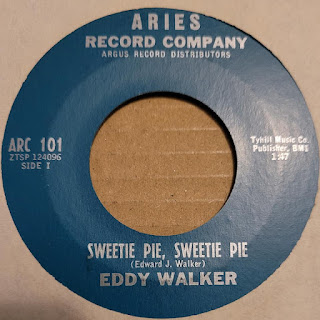 Back in 2015, I posted on this here very blog about a disc I was desperate to track down, something I had heard short clips from on eBay but had missed out to another buyer when bidding. Now, after almost seven long years and another round of being outbid in the dying seconds of an online auction, I finally own a copy of the magnificent Sweetie Pie, Sweetie Pie by the elusive Eddy Walker.

Issued by the New York-based Aries Record Company, both sides of the disc were written by the performer, as Edward J Walker, who I am led to believe came from Montana. Well, whichever city or state may have hailed from I am forever grateful, for both sides of this fine recording are wonderful: wonderfully off, that is.

On Sweetie Pie, Sweetie Pie and the flip side, It’s Time For Love, Walker’s voice is reed-thin and as flat as the proverbial pancake and, in spite of some sterling work on the A-side, the band playing on the flip is tired and bored. I played this one-take wonder on The World’s Worst Records Radio Show earlier this week, and my friend and fellow Sheena’s Jungle Room presenter DJ GeorgyGirl was immediately struck by how much that off-key trumpet player conjures up images of the great Harry Arms, the hysterically funny horn player with the George Garabedian Players. 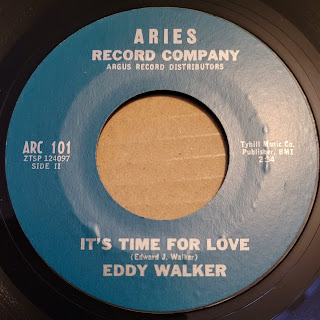 The Aries Record Company was almost certainly a vanity outfit, and appears to have only issued this one single, and this was just one of a number of different Aries companies that have existed over the years.
There was an Aries Records label extant in California in the late 1960s, co-founded by Shelley Fisher but I’m certain this was a different outfit, as this disc almost certainly originated in New York: the matrix prefix (ZTSP) indicates it was pressed by Columbia in New York, and the six-digit suffix would suggest that it was issued around 1967, four years earlier than I had originally believed. This particular Aries was distributed by a company called Argus Record Distributors, who worked out of an address on West 46th Street, New York. Owned and operated by Rose Saggio since at least 1964 (at that time they were on 10th Avenue), the company had several independent labels on their books, including Juno, Criterion, and Spiral.

Both Sweetie Pie, Sweetie Pie and It’s Time For Love were published by Tyhill Music, another New York-based company owned by Elizabeth Doll Hill, who also wrote songs under the name Lisa Harrison and Betty Hill – which is where the name (Bet)Ty Hill comes from. As a songwriter, Betty Hill was most productive during the early 1960s, copywriting several songs in 1963 under her full name. And that’s about as much as I’ve got. There are a myriad Eddie Walkers and Edward J Walkers out there but none seem to be our Eddy. If anyone has more info about this wonderful record or the man who wrote and performed it, please do let me know.