Mr B. A. Tweten Sings 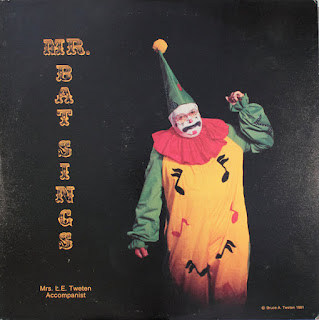 Mr. Bat Sings is one of those odd albums that regularly features on those ‘worst album art’ lists but – I would assume – few people have actually listened to. With the scary clown on the cover, why would anyone bother to venture inside, especially when that clown appears to have had a butchery implement airbrushed from his cold left hand? It’s just horrendous.

Sadly the musical offering hidden behind this nightmare image bears little or no relation to the horrors you would expect, as the album consists of Mr. Bat – aka Bruce Arthur Tweten – crooning his way through 14 gospel standards, accompanied by Mrs. L.E. Tweten (his mother) on rather subdued organ.

From Kensal, North Dakota, Bruce was born in March 1936. The son of Lamoyne Everett Tweten and Alma Gabrielson, Bruce sang as a soloist at St John’s Catholic Church in Kensal, and over the years also sang – either as a soloist or as a member of a choir – at a number of churches around the region. A 1964 press report has him performing as part of the ‘WSAF chorus’, but I can find no record of this choir. Could it be a misprint, and the paper meant the USAF Chorus, the choir of the United States Air Force? Members of Bruce’s extended family served in the Air Force, so I believe that to be likely.

But what on earth is going on with that cover? Did Bruce perform as a clown at kid’s parties in North Dakota? I can find no evidence to suggest that he did, so what’s it all about? It bears zero relation to the sacred songs Bruce performs on the disc, so I really am at a loss to explain it.

A lifelong Republican, Bruce spent his last days in Jamestown, North Dakota. He died on 26 October 2001, aged 65. From the information I have been able to glean from his obituary, he appears to have been married at least twice; his second wife, Ada Mae, predeceased him by two years. Mother Alma died in 2006, at the grand old age of 92.

If you can bear it, the entire album is available on YouTube, but for the less masochistic among you, here are a couple of cuts from the super-odd Mr. Bat Sings Ten Thousand Angels and the album’s closing track, Would You Feel Lost In Bethlehem. Enjoy!