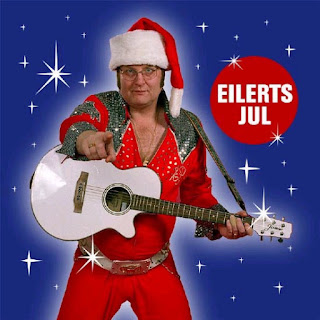 Well, here it is... almost. Just over two weeks to go until the Big Day, so I had better pull my finger out and give you some Christmas-themed music, hadn't I?

And how better to kick off than with three tracks from Eilert Pilarm's seasonal offering from 2001, Eilerts Jul or Eilert's Christmas?

I haven't featured Eilert on the blog for a long time, more than 11 years in fact, although he regularly pops up on The World's Worst Records Radio Show. Just this week I was reminded, by regular blog and show contributor Stephen 'Beany' Green, of this particular album, and it felt like an entirely appropriate opener for this year's Christmas cavalcade.

Eilert, for those previously unacquainted with his genius, is (or was, he stopped performing over a decade ago) Sweden's number-one Elvis impersonator. A cult figure in his home country, Eilert became semi-famous on TV, appearing in adverts cooking while dressed as a cut-price Presley, and singing his off-key renditions of the King's greatest hits.

Born in 1953, his original surname was Dahlberg, but he changed it to Pilarm to give himself the same initials as his hero. Championed here in Britain by the late John Peel, Eilert first appeared on stage - playing in an ice hockey arena in the town of Husum - in his Elvis garb in 1992, while working at a paper mill. A local radio DJ saw him, got hold of a couple of cassettes of Eilert doing his thing and began to feature him on air, National stardom soon came: Eilert issued six albums and a couple of EPS between 1995 and 2006, he appeared on TV in Britain and the USA, and in 2001 alone he played over 150 gigs across Sweden.

Here are three tracks from the brilliant Eilerts Jul: Eilert's cover of the Elvis standard Blue Christmas, a Swedish version of Silent Night (Stille Natt), and a traditional Swedish carol from 1898, Nu Tandas Tusen Juleljus, which roughly translates as A Thousand Christmas Candles are Lit.