Pot Holing For Fun and Profit 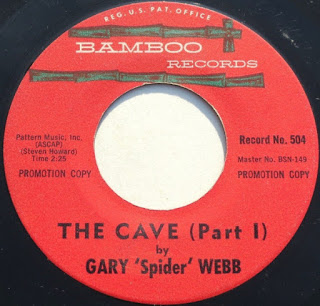 You’ll recall – for it was only a couple of week ago – that I recently introduced you to Chuck Holden’s weird and wonderful 45 The Cave, issued by Joe Leahy’s Unique Records in 1956. Well, apparently that’s not the only peculiar record about damp and dark crevasses.

Gary “Spider” Webb’s The Cave (Parts one and two) was originally issued by the tiny Bamboo label in 1961. It’s just as nuts as the Chuck Holden track, but this time with an added sense of suspense that gives it a more Timothy-esque twist. Oh, hang on: that makes three crazy cave records.

I’ve not been able to discover much about Webb, apart from his being a former serviceman, stationed at the Naval Air Station Alameda in California in 1959. He was also an impressive drummer, winning an all-Navy talent contest and appearing on the Ed Sullivan Show. Webb’s parents owned an apartment complex in Hollywood, called The Hollywood Argyle, and he would go on to play on sessions for our old friend Gary Paxton. Paxton formed a studio band called The Hollywood Argyles (presumably named after the apartment complex) for a one-off single by his friend Kim Fowley, Alley-Oop. When that song became a hit – eventually selling over a million copies in the US alone - Paxton formed a touring band, and Webb became their drummer. He did not perform on the record.

Being a drummer kind of complicates things, because there’s another Spider Webb who was also a drummer, and details about the two different men have been conflated across the Internet.

We can be reasonably sure that the 45 issued on Donna records in March 1960 and credited to Spider Webb, Drum City  (again in two parts), was by our Gaz for several reasons. First of all, the other Spider Webb, born Kenneth Ronald Rice, was only 15 at the time of the recording. Also, a year before a band called Spider Webb And The Insects had been signed to Donna’s parent company, Del-Fi. SW&TI are notable because a former member was Tom Fogarty, brother of John who would go on to become the rhythm guitarist for Creedence Clearwater Revival.

When Tom was still in the band SW&TI recorded an unissued session for Del-Fi, but after the tracks recorded were rejected the band broke up; Tom went on to find fame and fortune and a solo Spider recorded his one-off single for Del-Fi’s sister label. That’s what you call research! 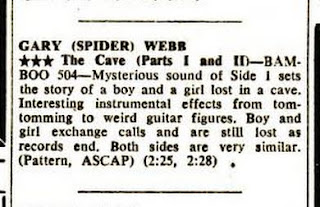 Two years after The Cave our Spider Webb issued a further 45, this time credited to his previous band Spider Webb And The Insects. Maggie/Big Noise From Winnetka was issued in 1963 by the tiny Lugar label, but it does not appear to feature any CCR alumni.

The other Spider Webb, an American jazz drummer and session musician, recorded with United Artists and Holland-Dozier-Holland in his early teens, before joining forces with King Curtis around 1967. He would go on to record for Fantasy in the 1970s, and was once married to the legendary Carol Kaye. As of three years ago, our Gaz was still living in California.