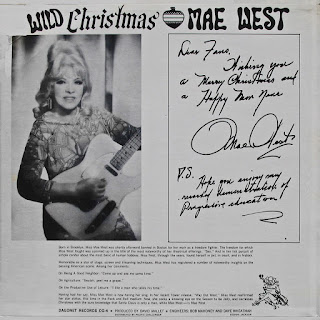 Happy New Year everyone… and as it’s a New Year what better for this week’s blog post than a couple of New Year-themed songs?

First up is Mae West and My New Year’s Resolution, from her 1966 album Wild Christmas – an album we featured back at the beginning of December.

Once again Mae is accompanied by Somebody’s Chyldren, and the album was produced by David Mallet, the same team that had served her so well on her Tower album Way Out West. Six years after the release of Wild Christmas Mae would make one last sojourn into pop and rock, issuing the album Great Balls of Fire on MGM in 1972.

Next up is an oddity from Sandy Stanton’s Film City song-poem label, I Like The Old Year by Beth-Anne Hayes with the Film City Orchestra. Although Film City is best known for its chamberlain-driven song-poems, it often issued vanity recordings, and this falls solidly into that category.

I Like The Old Year was written by Barbara L. Hayes (presumably Beth-Anne’s mother or grandmother), and issued around 1970, the same time that the flip side, Oh Please, Dear Santa Claus, was copyrighted. Sadly I have no further info on this one; both names are reasonably common, and a quick scour of the internet yielded nothing, so if you know anything about Beth-Anne or Barbara, please do get in touch.