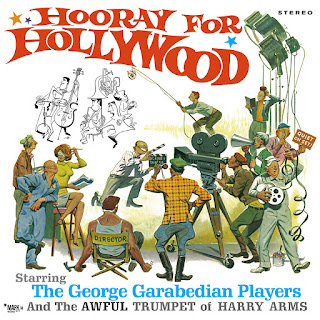 It’s a rare event when this blog features a novelty record, but this is such a great one – and the tracks have been going down a storm on The World’s Worst Records Radio Show – that I feel it is more than appropriate to share here. If you like the Frivolous Five, or perhaps the magnificent Mrs Miller or Madame St Onge, you’ll love this. Welcome to Hooray For Hollywood Starring the George Garabedian Players Featuring the Awful Trumpet of Harry Arms.

Issued in 1968 by Mark 56 Records, there’s little doubt that this album was inspired by the success of such oddball characters as the aforementioned Mrs Miller or Tiny Tim. The Frivolous Five is an obvious link, especially as Garabedian, Arms and company cover Whipped Cream, the Herb Alpert track that inspired the Frivolous Five’s 1966 album Sour Cream and Other Delights, among the album’s 10 tracks.

The sleeve notes give away little: "Wonder if the best musicians in Hollywood were called for a record date...and, HARRY ARMS happened to drop by with his AWFUL TRUMPET...?" that’s it, in toto.
Garabedian, a musician, producer and arranger who also owned Mark 56 Records, specialised in cover albums, supermarket specials, advertising music (not too dissimilar to library music I guess) and reissues of out-of-copyright Hollywood films in audio form. The success of Alpert in the pop music industry gave him an idea, and he cut deals with advertisers for a series of Tijuana Brass sound-alikes, some direct covers of Alpert hits, others faithful facsimiles of hits in an Alpert style. Garabedian’s music was used to sell everything from Philips electronics to Kentucky Fried Chicken (there’s even a spin-off KFC/Garabedian album, Colonel Saunders’ Tijuana Picnic that was repackaged at least half a dozen times as Pepsi Cola Presents Tijuana Taxi, Pet Ice Cream Presents Tijuana Taxi and so on) and Taco Bell (the album Taco Bell Presents Tijuana Taxi is a different collection to the KFC one).

By the mid-1970s, he had all but given up on releasing his own music or attempting to out-Herb Herb, and was concentrating instead on reissues of old radio serials via his Golden Days of Radio imprint, and other oddities including a reconstituted telephone interview with legendary recluse Howard Hughes. His work in reissuing historical recordings – including those by Mae West and Laurel and Hardy - paid off: in the late 70s and early 80s he received three Grammy nominations for his reissues.

Harry Arms remains a mystery. The name is almost definitely a pseudonym, but for whom?

Anyway, here are a couple of tracks from this magnificently mad album: the opener Hooray For Hollywood and the brilliant Georgy Girl. If you’d like to hear more, the whole album is kicking around on the net and it's well worth tracking down.