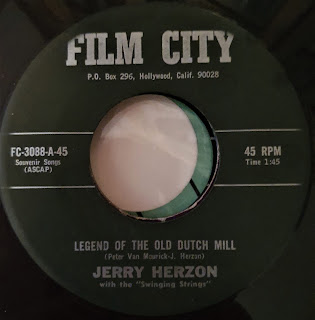 It’s been a while – almost exactly 10 years to be precise – since we last featured Frank Perry on this here blog, so let’s make up for that now with a pip of a song-poem 45 from Sandy Stanton’s Film City label.

Having said that, our Frank only appears on one side of this particular release, Jerry Herzon takes the topside, The Legend of the Old Dutch Mill, relegating poor old Frank to the flip, Cheri. Herzon is credited on the A-side as having composed the clip-cloppy tune to The Legend of the Old Dutch Mill, and label head Stanton takes composer credit for the tune to Cheri, which is a bit of a liberty if you ask me as it’s clearly stolen wholesale from the Sheik of Araby.

The lyrics to both songs on this 45 were composed by Peter van Mourick, and it was only when researching that name did I realise that I had actually featured him before: he was the lyricist responsible for another Film City 45, Chattanooga, Nashville, Battlecreek Trek/Antique Hunter's Craze, which I wrote about back in March 2017. You can find that post HERE

As is invariably the case, neither 45 is dated, making it impossible to be 100 percent accurate about when they were recorded and released, but I’d pitch it somewhere around 1967, after – but not too long after - Rod Rogers/Rod Keith left Film City for Preview (around the beginning of 1966) and Frank Perry became Stanton’s go-to guy. Perry sounds very young here, his voice definitely matures and becomes fuller over the years, so I figure that date will not be too far wrong. 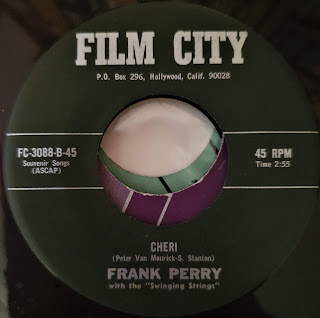 Jerome ‘Jerry’ Herzon had been active since the 1940s, even writing songs while serving in the navy on the USS Belmont during the Second World War, and at one point he ran his own publishing company, Chair Music, in California.

The only Peter van Mourick I can find who was working around this period was pool attendant on the Dutch island of Aruba, but I think it’s safe to assume he’s not our man. If you know anything more about this release - or any of the folk involved - do please get in touch.