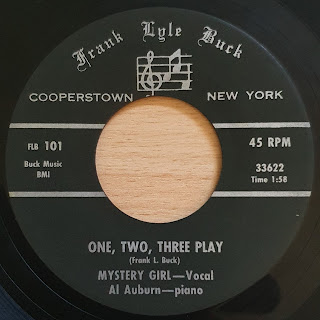 Last week I wrote a little about Globe, the Nashville-based studio that pumped out hundreds of song-poems and vanity projects by singers including Sonny Marshall and JoAnn Auborn, working under a variety of different names. I mentioned that I owned a copy of a song-poem 45, on Frank Lyle Buck Records, credited to The Mystery Girl, one of JoAnn’s many pseudonyms, and that on  that particular disc she and Marshall appear accompanied by pianist Al Auborn, who I guess could either have been her husband or her brother.

Well, here are both sides of that disc, One, Two, Three Play and Tipsy Ippsy. 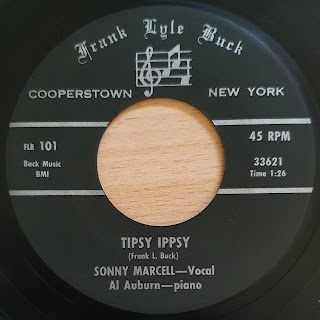 Frank Lyle Buck had been writing songs for a number of years, with little or no return. His first efforts – the inspired Tune Number 1 and Tune Number 2 – were copyrighted in 1949: the following year he wrote Yours To Love,  which Sammy Marshall would record in 1962, the same year as One, Two, Three Play and Tipsy Ippsy appeared.

The single was listed in Billboard on 2 June 1962 as possessing ‘limited sales potential’. The lack of interest did not put our amateur auteur off: in 1962 alone he released four singles – all made with the Globe Recording Studio – on his own Frank Lyle Buck label. One, the aforementioned Yours To Love, was reviewed by Cash Box in April 1963 (they called it ‘a soulful, Nashville-oriented reading… with a funky shuffle beat’) and even after these all flopped he continued unabated. Letter From College came along in 1964; along with the rather wonderfully-monikered Peaceable Smith, he penned Just Another Day in 1966. 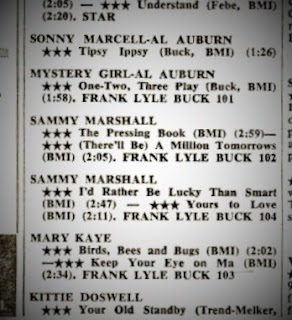