You Are the GoZoo Band 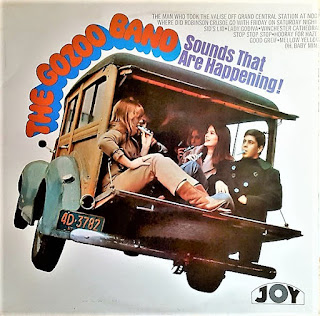 1966 was a great year for musical oddities: Mrs. Miller was ruling the roost internationally; in Canada musician and producer Tony Roman unveiled the wonderful Madame St Onge, those silly savages Teddy and Darrell were doing their thing, and around the world, the novelty album was big business. Every country – almost every label – had a left-field act that was doing decent business, charming TV audiences and selling enough copies of their latest opus to keep the men at the top happy.

It was into this heady age that the GoZoo Band suddenly appeared. ‘Sounding like a semi-melodic swarm of bees’, according to one contemporary reviewer, their gimmick was playing pop music using kazoos, a dozen years before Rhino founders Richard Foos and Harold Bronson formed the Temple City Kazoo Orchestra.

Originally released via their own Go Go Records label (distributed through Epic; reissued in the UK in 1968 on the President Records imprint Joy), the GoZoo Band’s solitary album, Sounds That Are Happening!, is just 25 minutes long. Featuring a mix of kazooed-up versions of recent pop hits (including Mellow Yellow and Winchester Cathedral) as well as old-timey vaudeville songs and a couple of originals, the album was produced by Tony Marer, who would go on to work with Norman Greenbaum, and featured musical arrangements from Jimmie Haskell (born Sheridan Pearlman), a prolific composer and arranger who specialised in movie soundtracks but who had worked with Ricky Nelson, Rosemary Clooney, Bobby Darin, the Lettermen, Pat Boone, Richard Chamberlain and dozens, if not hundreds, more. Haskell composed two of the tunes that appear on the album, including the 45 Sid’s Lid.

Unsurprisingly there is zero information on the jacket or on the disc itself about the individual members of the GoZoo Band. It’s safe to assume though that the kazoo-toting hipsters in the back of the Woodie on the front cover of the album were models and not one of them had the skill to blow through a plastic tube. My best guess would be that the album was recorded by a mix of session musicians and members of Dr. West's Medicine Show and Junk Band, the Norman Greenbaum-led psychedelic rock band who had a minor hit with The Eggplant That Ate Chicago... which was also issued by Go Go Records, also produced by Tony Marer and, crucially, also featured kazoos.

Anyway, here, for your enjoyment, are a couple of tracks from Sounds That Are Happening!, their covers of the Hollies’ Stop Stop Stop, and of Donovan’s Mellow Yellow.