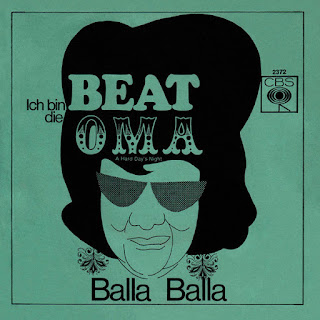 No one seems to know the name of the real woman behind the name Die Beat Oma (the Beat Granny), the aged Austrian chanteuse who released just one 45... The very disc that I present for you today.

Issued in Germany in 1966, in the same year that both Mrs Miller and Mme St Onge were unleashed on an unsuspecting world, Ich Bin Die Beat Oma (I Am the Beat Grandmother), was a ‘cover’ of the Beatles’ A Hard Day’s Night, with new lyrics by Andy Wölfel. Her solitary release, Ich Bin Die Beat Oma was backed by Balla Balla, a song written by bass player Horst Lippok and originally recorded by the German beat group The Rainbows, of which Lippok was a member, in 1965.

On the A-side of the single Die Beat Oma is accompanied by a group called Jerry & The G-Men. According to the Discogs listing, she toured with the band in the mid-60s, and a little ferreting around leads me to believe that she did indeed play dates during 1965 and 1966. Andy Wölfel - the man who liberally adapted the words of Messers Lennon and McCartney - acted as her manager (and, presumably, as manager of Jerry and co too), and on at least one occasion Die Beat Oma and Jerry & The G-Men played Wölfel’s hometown, Klosterneuburg in Austria.

No band is credited on the flip side, but The Rainbows' version of Balla Balla had also been issued by CBS, and to my ears both recordings seem to utilise the same basic backing track, not unlike how Tony Roman used backing tracks by his band Les Baronets for the Mme. St. Onge project. I understand that Wölfel, who also had a role in the 1967 German film Heubodengeflüster (a.k.a. Whispering In The Hayloft), and who was Austria’s first notable beat group manager, died of an overdose.

That's all I have: any further information on this incredible disc and its perpetrators would be most welcome.