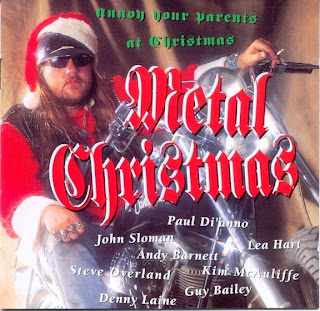 Hello and welcome to the last of this year’s ‘new’ Christmas-themed posts. I’ll be revisiting Christmases past for one last time on Sunday, but until then here are a couple of awful pieces of nonsense to get you in the mood.
First up is Paul Di’Anno with his version of Gary Glitter’s Another Rock and Roll Christmas. Masquerading around the internets as an Iron Maiden track, this cover of everyone’s favourite child molester’s perennial hit was in fact recorded by the band’s original vocalist: he appeared on their first two albums and the import EP Maiden Japan, the original cover of which featured the group’s mascot, Eddie, holding Di’Anno’s severed head. Tasteful.

Di’Anno’s stab at Christmas immortality originally appeared on the album Metal Christmas, issued in 1994. That album also featured former Wings and Moody Blues singer/guitarist Denny Laine – and you can’t get much more metal than that! Absolute garbage from start to end; my unending thanks to Pope Omnipuscle for bringing this piece of crap to my attention.

Today’s second track is from the granddaddy of outsider music, Tiny Tim and his version of Rudolph the Red Nosed Reindeer. Issued in 1994, almost two decades after his brief spell in the showbiz spotlight and just two years before his untimely death, Tiny Tim’s Christmas Album is one of the more palatable of Herbert Kahury’s late-period releases and well worth searching out if you like the sound of falsetto-voiced ukulele players murdering Christmas classics.

That’s you lot for now, see you on Sunday.