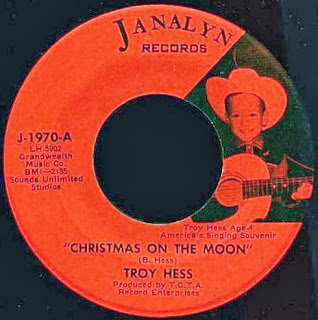 Another trip down the yuletide memory lane for you this Sunday.

Although this blog was started in 2007, it wasn’t until 2009 that I began bringing you the annual Christmas Cavalcade, and the second disc I posted all those years ago was the brilliant An Old Fashioned Christmas (Daddy’s Home) by Linda Bennett. Released by Mercury in 1975 (or was it? I’ve only ever seen evidence of promo copies, never of finished stock editions) the song was produced and co-written by Paul Vance, whose credits include Brian Hyland's Itsy Bitsy Teenie Weenie Yellow Polka Dot Bikini, Perry Como's Catch A Falling Star, plus hits for the Cuff-Links and Johnny Mathis amongst a string of others. Born in Utah in 1942, Linda Bennett was no stranger to the recording studio either, with albums, TV appearances (including The Adventures of Ozzie and Harriet, Bonanza, Flipper and Doctor Kildare) and film credits to her name: as a child actress she featured in The Creature with the Atom Brain, the Seven Little Foys and in Queen Bee, starring Joan Crawford at her scenery-chewing best.


Now let’s revisit 2012, and the truly horrible Christmas on the Moon, by Troy Hess. Probably better known by bad music aficionados for his classic Please Don’t Go Topless Mother, Troy was just four years old when he recorded this virtually unintelligible piece of nonsense, written for him by his father Bennie. Fellow music blogger Steve Carey once described his performance as ‘Huckleberry Hound talking to you on a broken telephone, with a bad connection, in a big echo-y bathroom, standing ten feet away from the phone. Also he's wearing a mask and eating a banana.’ Quite. Shockingly, this was not Troy’s first 45: the Ballad of Troy Hess appeared, and was credited as having been written by Troy himself, when he was just three years old! Troy is still active today, performing with his band the Texas Heartbreakers.


Again from 2012 comes Mae West and Santa Come Up And See Me. Ms West’s contribution to bad music is well documented, with a clutch of awful albums featuring dreadful cover versions of rock and roll standards such as Twist and Shout and her own feeble attempts at composition, never better exemplified than in the horror that is Mr Criswell Predicts, her ‘tribute’ to TV psychic, Ed Wood alumnus and all round crackpot Jeron Criswell King. Santa Come Up And See Me comes from her 1967 album Wild Christmas, recorded when the old gal was nearing 75.

Finally today we have Christmas is For the Family by the Happy Crickets from their album Christmas With the Happy Crickets. Undated, but probably originally released around 1960, I was reminded of this when I was putting together Friday’s post about the Caroleers (both ‘acts’ recorded for the Synthetic Plastics Company of Newark, New Jersey: my suspicion is that the Happy Crickets are simply some of the male members of the Caroleers). Our old friend Ross Hamilton describes this as ‘probably the worst attempt at cashing in on the singing animal phenomenon. The singing is horrible, even when sped up, and the arrangements sound like they were slapped together by a committee of drunks’. I absolutely agree!