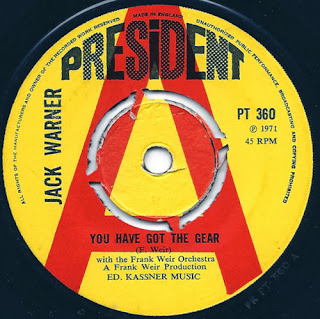 Happy Friday my friends, and welcome to the last WWR post for 2013. Hope you’ve all had a fantastic Christmas.


Today’s brace of badness comes from actor Jack Warner, and both sides of his November 1971 single You Have Got the Gear/Somebody Asked Me. Words fail me although, despite what the title might suggest, this isn’t a song about intergenerational drug dealing. Rather the A-side features the star of Dixon of Dock Green intoning what record company President called ‘a beautiful, melodic number which successfully bridges the generation gap when a son takes problems about his love-life to his father’.


You Have Got the Gear was written, produced and orchestrated by Frank Weir (who scored hits on his own, and with Vera Lynn, in the 1950s), with the B-Side was penned by Warner himself. According to a contemporary press release Warner’s faux-French accent on the flip was inspired by the ‘hundreds of letters from people asking him to sing a (Maurice) Chevalier song’. There’s no accounting for taste: both sides are just awful.


Born Horace Waters in 1895 (his sisters were well-known music hall act Elsie and Doris Waters) Warner made a name for himself on the stage and on radio before appearing in a number of classics from the famed Ealing studios, including Hue and Cry and The Ladykillers. In 1949 he first played the role for which he will forever be remembered – that of policeman George Dixon in the movie The Blue Lamp. Warner reprised the role in 1955 for the TV series Dixon of Dock Green, which ran for 21 years. He released a number of recordings during his long career, the last of which, Your Silly Bird’s a Liar (not quite as sexist as it sounds) was issued in 1975, six years before Jack passed away.
Enjoy!
Posted by Darryl W. Bullock at 08:46

Email ThisBlogThis!Share to TwitterShare to FacebookShare to Pinterest
Labels: Frank Weir, Jack Warner, Somebody Asked Me, The Ladykillers, You Have Got the Gear, Your Silly Bird's a Liar