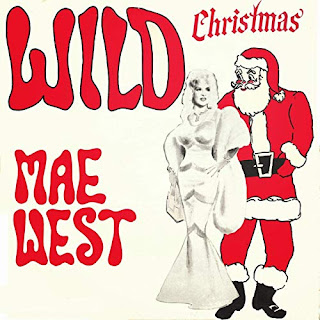 Every year this gets a little bit harder. Every December since 2009 I’ve tried to bring you a cornucopia of Christmas-themed crapness, in an annual Christmas Cavalcade of terrible records. After a decade of dodgy discs, you would think I would have run out of new material to bring you.

It just means that each year I have to trawl though my previous posts to ensure I’m not repeating myself: that’s what takes the time. For example, I had intended to post Red Sovine’s Here It Is, Christmas, but I blogged that back in 2017. Never mind: over the next few weeks I’ll be featuring a handful of Christmas clunkers I know I have not blogged before.

First up we have four tracks from Mae West, Hollywood royalty and naughty ne’er-do-well of yore, and her only Christmas album, Wild Christmas. Issued in 1966 on the tiny Dagonet label, just a few short months after Mae had released her major-label rock ‘n’ roll album Way Out West. Way Out West had been a minor hit, peaking at 116 on the Billboard album chart, so you might assume that Tower (an imprint of Capitol) only had her under contract for the one record: it makes no sense to let her go, especially in light of the success their parent company was having with Mrs Miller. Until you do a little digging that is.

Dagonet was a TV production company: their spin-off record label issued very few discs, but an act signed to the company, variously known as The Chyldren and Somebody’s Chyldren, provide the uncredited backing for Ms West on Wild Christmas. Most Dagonet releases were produced by David Mallet. Mallet also produced Way Out West, and Mae’s backing band on that album was Somebody’s Chyldren. You see, it all adds up now. My assumption is that the tracks for both albums were recorded during the same sessions, but Tower declined to issue a Christmas album because it was too soon after Way Out West (which had been issued in July) or, more likely, that there was not enough material to produce a viable album.

Wild Christmas is a weird little album, just eight tracks and clocking in at 20 minutes, although it did spawn a single, Quint Benedetti's Put The Loot In the Boot Santa, which was backed by a cover of the Beatles’ From Me To You, listed on both the album and 45 as With Love From Me To You. The album was reissued, with a rejigged track listing, as Mae In December for the anthology The Fabulous Mae West.

From Wild Christmas here’s Put The Loot In the Boot Santa, Santa Baby, Merry Christmas Baby and, as a bonus, Santa, Come Up And See Me, which I did feature on the blog back in 2012 but that link is now dead. As Ms West once said, ‘My left leg is Christmas and my right leg is New Year’s. Why don't you visit me between the holidays?’