Let's Go To The Beach 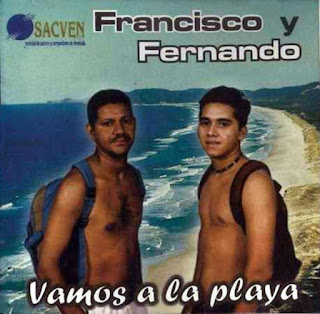 Over the last few weeks I’ve been treating listeners of The World’s Worst Records Radio Show to the selected cuts from the delightful CD album by Fernando Y Francisco. Realising that not everyone who reads this here blog listens or has access to the radio show, I thought I’d treat you to it too.

Issued in 2003, Vamos a la Playa (Let’s Go to the Beach) is the only album (to date, anyway) from Venezuela’s Francisco y Fernando, two semi-naked backpacking chums who self-funded the recording and release of the ten tracks (in other, less reputable corners of the net you’ll find Sacven credited as the label that issued ValP: Sacven isn’t a label, it’s a copyright society, similar to BMI or ASCAP, the Sociedad de Autores y Compositores de Venezuela).

With our boys vocalising (you can’t really call this singing) over pre-recorded backing tracks, bad midi programmes and the like, unsurprisingly the CD disappeared without a trace, selling probably no more than a handful of copies to family and friends. In fact, it would have been forgotten forever if Francisco had not appeared on a local TV talent show, TV Libre, a year or so after the release of their magnum opus, performing an a cappella version of the title song. His appalling performance quickly became something of a viral hit in his home country, igniting interest in the album.

And, my goodness, what an album it is! Highlights include the wonderful Rigi – sample lyric “Rigi, rigi-rigi-rigi, rigi-rigi-rigi, rigi-rigi-rigi”, the title track Vamos a la Playa and the incredible Con La “P” – a song that pretty much consists of an endless list of things that begin With A “P”. It may make some sense in the boys’ native tongue but does not travel well at all: from what I can make out “Podemo decir pana, pana, panaderia/Ponte, ponte, ponte, las pilas” translates as “I can say bread, bread, bakery/Put on, put on, put in the batteries”. Shamelessly, Con La “P” uses the same backing track as Vamos a la Playa.

I love the way that the boys take every opportunity to remind listeners who is performing, shouting out “Francisco Y Fernando” at every opportunity, like there’s some old school rapper in da house, yo, yo yo! Luckily they refrain from doing so during the woefully out of tune ballad Mariluisa and the Ricky Martin-esque Yo Quiero. Francisco is still making a racket today, performing in tourist bars under the name Francisco el Playero. Fernando has kept a respectful silence for more than a decade.

You can find most of the album on YouTube if you wish to, but for now here are what for me are the two standout tracks, the aforementioned Rigi and the title track, Vamos a la Playa.