The Joy Of Lex 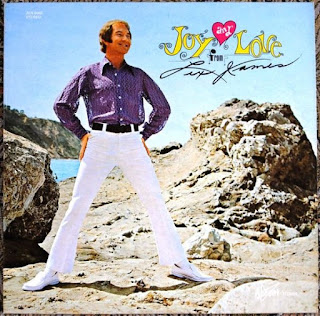 The album I’m featuring today comes courtesy of Dave Frankel, owner of Inner Groove Records of Collingswood, NJ. Dave is also a follower of this here blog, and was kind enough to send me a rip of this album when it turned up in his store recently.

And, oh my, what a record it is. Joy and Love From Lex James is an absolute pip! Through a mix of standards and his own compositions, pianist Lex lets us into his wonderful world.

Hailing from Big Spring, Texas, as the sleeve notes declare: “Lex James has been in the spotlight musically since his ‘stage debut’ at the age of six in his home town.” By the mid-1950s he had left home: in 1956 we find him working with a second pianist, Art Darcy, at the cameo Room in Palm Springs; three years later he’s earning a living in Pasadena, living in a custom-built, mobile trailer along with Art, his partner, and their two grand pianos. By the middle of the following year, James was vice president of the Los Angeles Pianists Club, an organisation made up mainly of cocktail bar pianists, with Darcy a member of the same organisation’s grandly-named Executive Council. Peachy.

But after a year of playing at separate venues, Lex and Art wanted to try something different. Playing piano nightly in in the town’s Old Virginia restaurant was not enough for the ambitious Mr. James: he wanted to bring two-piano music to one-horse towns, as he told Pasadena’s Independent newspaper. “The thing that got us started on this trailer idea was the problem of finding matching pianos. Even In large cities, it’s hard to find two available grand pianos of the same kind - not to mention matching the tone quality and touch. In small towns, where we want to play, it’s almost impossible” 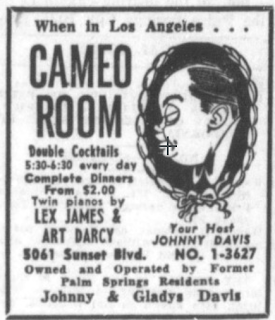 Lex left the Old Virginia in June 1960, planning to put their $25,000 two-piano mobile studio on the road, dragging the contraption behind a three-quarter-ton cab. James and Darcy took turns driving the truck that pulled their piano parlour. “We had to hunt for a long time before we found a trailer company willing to build it,” he admitted. “They all tried to discourage us.” The two pianos were strapped and clamped into a standard large house-trailer, 35 feet long and eight feet wide. One side of the trailer had been adapted to open down to form a piano unloading ramp. “We use a hydraulic jack,” said James, “and put special oversize ball-bearing casters on the piano feet. Sometimes we have to take off the legs and pull the two pianos on dollies, on their edges, like harps.” The whole rigamarole was worth all the trouble, he insisted, because the joy of playing two perfectly-matched pianos was superior to the joy of making any other kind of music. “We try to make it sound like one gigantic instrument. In most teams you can tell who has the melody and who is playing support. But we try to toss the melody back and forth between us so fast that nobody can tell who is doing what.”

Obviously at some point between setting out on the road in the summer of ’60 and his solo album debut (issued around 1972 would be my guess, as most of the covers on the album originally appeared around 1969/1970) Lex and Art abandoned their plans to bring two-piano music to the masses, and our Lex found his way back to California. In 1966 he was playing piano nightly at Lydia and Leonard Stahl’s Town House, in Arcadia 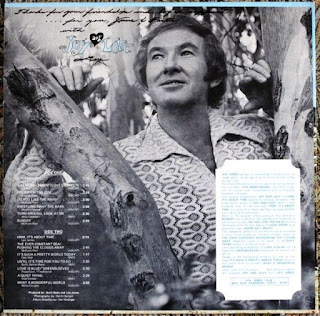 This Liberace in lace (check out those shirts!) continued playing in restaurants: in 1973 he could be found, bringing his own special brand of keyboard magic to the new Medallion Room in San Gabriel five nights a week. Lex even had his own fan club, run from a tiny office in Pasadena. I’ve found evidence that Lex and Art continued to tour, although one would assume without the trailer, appearing together in Tucson in 1976.

Then something else happened: Lex found God, and became the Reverend Lex James, still playing the piano but this time to the glory of the almighty. As late as 2001 Lex and Art were still touring together, playing for mostly religious audiences. Sadly he passed away in 2009 at the age of 77. He was survived by Art, happily in these more liberated times able to announce himself as having been Lex’s life partner, after something like a half-century together.

Here are a couple of tracks from this magnificent album, Where Do I Begin (Love Story) and Sunday. Thanks Dave! I owe you one.