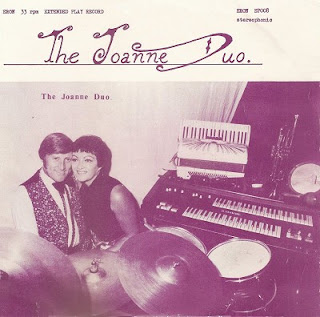 Way back in the mists of time, well, last November to be exact I first introduced you to cabaret lounge act The Joanne Duo, and bemoaned the fact that, although I knew of at least four releases by them, I had only been able to track down a copy of one, the Feelings EP. Well now, thanks to my friend Conrad Zimmer, I am able to bring you a couple of select cuts from their album, Together.

Issued on the Kent-based Eron label in 1977, Together is one of the most despondent records you will ever hear. And there’s the rub. The Joanne Duo worked - a lot. How could an act that maintained a successful career for around two decades and kept themselves busy working cabaret clubs, cruise ships and the like have made such an appallingly bad record?

Recorded “in the summer of 1977 when the duo were playing their second successful season at Maddieson’s Chalet Hotel, St. Margaret’s Bay, Kent”, some of the blame has to lie with the producer. Sure, Eron was a small outfit and had tight budgets, but surely they could have afforded a few extra hours in the studio to fix the numerous fluffs and mistakes? And why does everything sound so unmitigatedly miserable? Where’s the spark? How can a couple who wore sequins for a living sound like they’ve just od-d on Mogadon? It doesn’t make any sense. They must have kept audiences happy with their live act, but my God you’d be disappointed if you queued up after a performance to buy a copy of this album from the boot of their car. Try to imagine the horror as you slapped this on your record deck and heard Tom’s appalling Louis Armstrong impersonation. Ghastly.

The album’s sleeve notes give us some idea: “The album was recorded without the doubtful benefit of double-tracking and there are no added instruments or session men. Thus the sound listeners hear on this record is a fair reproduction of the duo’s normal playing - bearing in mind, of course, that the record cannot reflect the duo’s professionalism in their visual performance, which is an important part of their act.” Joanne, as I previously revealed, was also a drummer (as can be seen from the EP sleeve here: the same photo was used for the front cover of the album), but she’s not playing drums here: all the ‘rhythm’ comes from her organ’s inbuilt drum machine. It all makes for a rather funereal feel. 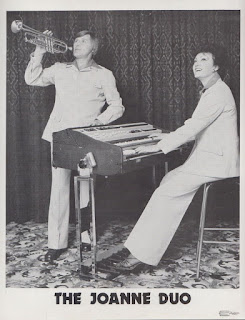 Anyway, thanks to Conrad – and to label owner/producer/Joanne Duo manager Ron Milner’s copious sleeve notes - I can now bring you a bit more information about the couple that I had last year.

At 16, Joanne was playing accordion with small dance bands in her native Yorkshire and taking part in amateur musical productions. She later emigrated to Australia and during the crossing entertained the passengers with her musical prowess. On her return to Britain, she worked for a while at a Pontin’s holiday camp, and as a resident solo accordionist in a hotel in Wetherby, where she met Tom. According to the notes on their first EP, Joanne “ was equally successful as a fashion model and appeared briefly in the film Holiday on the Buses.” She’s not credited at IMDB, so my assumption here is that she appeared as one of the many uncredited extras.

Tom began playing the flugelhorn in a brass band at the age of seven, and by 21 had mastered most brass instruments. He played with the Yorkshire Copper Works Band, the Leeds Musical Society Symphony Orchestra, and played semi-professionally on the local pub circuit. Meeting Joanne at the Alpine Inn in Wetherby (destroyed in a fire in 2006) they decided to form a duo, both musically and in life, marrying shortly afterwards.

Joanne went on to master the electric organ (as you’ll hear on the tracks below) and Tom generally played tuba, trumpet, ukulele, and harmonica. They toured extensively and were a particularly popular draw at US forces bases in Europe. The duo issued their first EP, again via Eron, in 1976, having moved south and settled in Kingsdown, Kent, in a bungalow overlooking the Channel.

I hope that both Joanne and Tom are still with us and that they're both happy. They clearly adored each other and I'd feel a lot less mean knowing that they were still at home in their bungalow overlooking the Channel, reflecting on a long and successful career and not caring tow figs what I might think of their recorded output. For now, here are the standout tracks from Together: Until It’s Time For You To Go and By the Time I Get To Phoenix. Enjoy!

Email ThisBlogThis!Share to TwitterShare to FacebookShare to Pinterest
Labels: By The Time I Get To Phoenix, Joanne Duo, Louis Armstrong, Until It's Time For You To Go